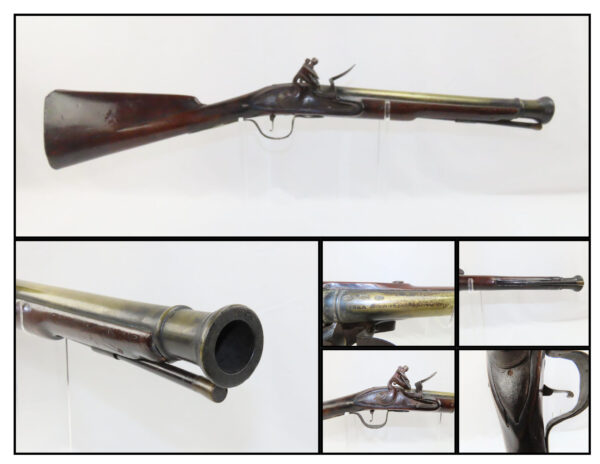 Here we present an antique British Brass Barreled Blunderbuss by Samuel Galton, made circa 1762, during the French & Indian War and just prior to the start of the American Revolutionary War. Samuel Galton was a Quaker gunmaker from Birmingham who supplied arms to the British government and various companies for trade and export during this period, to include the African slave trade, and the East India Company. Galton joined James Farmer in partnership as early as the 1740s. The Galton family would eventually run the business for 3 generations in addition to starting a bank. Their wares would have been in service during the French & Indian War, the American Revolution, and the Napoleonic Wars to name a few conflicts. By the time the American War for Independence began, Galton was one of the largest gunmakers in Britain.

The flintlock blunderbuss was the original coach gun, being a short, handy and devastating weapon at close range. It was capable of firing up to 20 buckshot in front of 120 grains of black powder, according to Spencer Tucker in Almanac of American Military History, Volume 1. It was used in many capacities, not the least of which were for Naval boarding or defending vessels, stagecoach and messenger companies.

This particular example bears the royal cipher in the center of the lock with “GALTON” and a date of 1762 at the tail. The top of the brass barrel is marked “FREA MINORIES LONDON”. The Minories was the gun making quarter just north of the Tower of London.

The overall condition is good. The action is as strong as ever. The bore is dark and dusty with age. The other markings on the barrel and lock are legible. The stock has been solidly repaired about the lock and wrist. An incredible French & Indian War, Revolutionary War flintlock blunderbuss to take any collection to the next level!