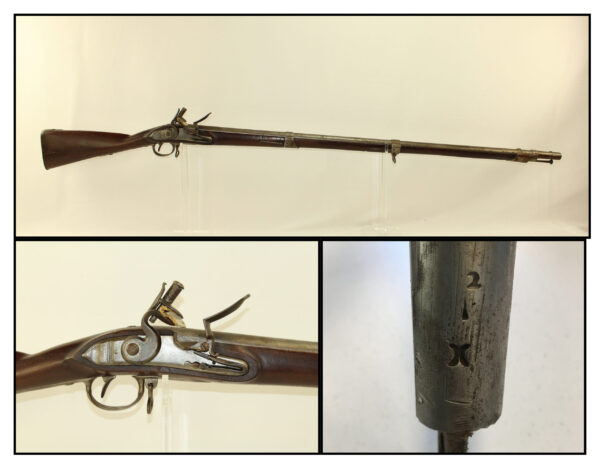 Here we present an antique Charleville Type Flintlock Musket, made circa 1780. This musket clearly reflects French influence from the Charleville pattern musket, to include the triple barrel bands and stock contours (specifically from the M1777). However, it bears some very interesting and unique markings throughout that do not appear to be French. There is a spangled “I” on the left side of the barrel, as well as a stamped “LG” inside a box on the inside of the lock. The underside of the barrel has a deep stamp of two convex lines touching in the middle of each apex. A lone “S” is visible on the side plate on the left stock flat. Finally, and this is the real twist, the lock is of the style of the Prussian Potsdam Model 1740 with its slightly arching lockplate, scalloped tail, angular flash pan, and scooped frizzen spring. In fact, this one looks just like one from an American Revolutionary War “US” surcharged musket pictured on page 7 in Charles Thayer’s (University of Pennsylvania) article “US Government Made Muskets of the Revolution, 1780-1783”. About this musket and two others he compares he states:

‘These Philadelphia-attributed muskets are uniform in the wide range of barrels and locks that were used, essentially anything that would work. For the most part, they are all components that would not have been available in quantity before 1777, and then only to a Continental facility. Three are known with Germanic locks that would not have been available before the victorious Continental armory captured them at Saratoga (1777) and in later battles. Previously there had been few victories, and few spoils. These locks are unmarked, as are known Brunswick locks, but American refinishing often removed markings, so we can only label them “Germanic”.’

His reference to Brunswick and Saratoga alludes to the Brunswick troops that the British had hired from the Principality of Brunswick-Wolfenbüttel in their treaty in 1776. 5,723 mercenaries were sent to include infantry, dragoons and grenadiers. Most of these fought at Saratoga in New York (September 19-October 17, 1777) and surrendered along with their British counterparts led by British General John Burgoyne. Not only was this a major blow to the British, but vital equipment was captured, which was hugely important as the American colonists did not have major armories of their own.

The overall condition is very good. The bore is smooth and dusty. The action remains strong.