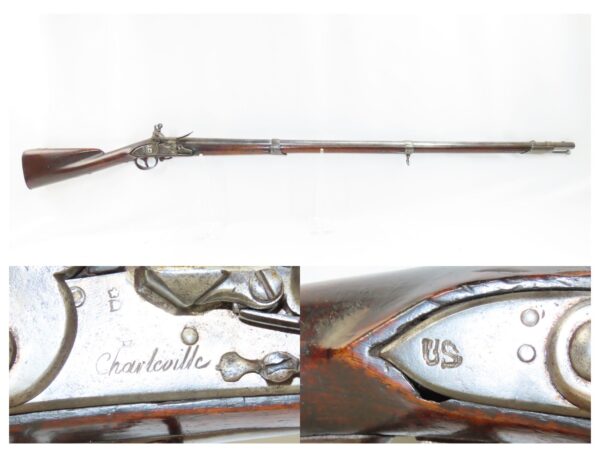 Here we present an antique U.S. Surcharged Revolutionary War Era French Charleville Model 1763/66 Flintlock Musket, made circa the 1760s-1770s at the armory at Charleville in France. During the American War of Independence, the French government supplied large quantities of muskets to the Continental army. Several arsenals in France produced muskets but the Charleville Model 1763 was the most common and soon all French muskets were referred to as “Charlevilles.” In March 1777, some 5,000 Charleville muskets were covertly received from France. George Washington implemented a resolution by the Continental Congress to stamp firearms with “US” as United States property to reduce theft.

This musket was originally manufactured for the French military and was one of the muskets supplied to the American revolutionaries during the Revolutionary War by our French allies either covertly prior to their formal involvement beginning in 1778, or afterwards in which they supplied large numbers of these muskets. Without French assistance, it is very possible that the United States may well have lost the war, but instead, we fought side by side with our French allies and defeated the British and received favorable treaty terms that extended far beyond the original thirteen colonies. The French Model 1763/66 muskets were widely used by the patriots and became the basis of the first U.S. martial muskets in the 1790s and beyond at the new Springfield Armory and later at Harpers Ferry.

The underside of the stock is marked “USTATES” along with “US” crudely marked on the tail of the lockplate. The lock is also marked “CHARLEVILLE” below the French inspection mark of “Star over D”. These same markings are found on a Charleville Arsenal Model 1763 with U.S. surcharge markings in the Smithsonian Collection.

The Charleville smoothbore musket, garnering its name from the main armory in Charleville, France, was the standard issue flintlock musket for the French Empire throughout the mid-18th and early-19th centuries. The original musket was first delivered in 1717, and over the next several decades, saw many revisions and improvements, making them a lighter, better fighting musket. With training, a single soldier could fire off between two and three rounds per minute. It was originally chambered for a .69 lead musket ball, as compared to the British “Brown Bess”, which chambered a .75 ball. Its effective range was really quite short by modern standards. That said, battles during the 18th and early 19th century were very closely fought and usually settled with the bayonet. The Charleville musket served in many conflicts, including the French Revolution, the Napoleonic Wars, the American Revolution, and the War of 1812.

The overall condition is very good. The action is strong. Smooth, patinaed bore. The stock is solid with an average amount of wear and no major damage. Aesthetically pleasing and packed full of history! Here is your chance to own a Revolutionary War musket used by the rebels and one of the first standardized guns in the young American arsenal!