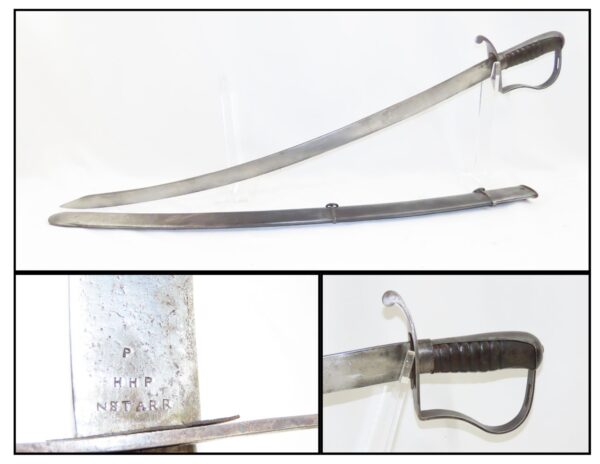 Here we present a vintage Replica Nathaniel Starr 1812 Contract Pattern Cavalry Sword made circa the mid-20th Century. These replicas were made in the 1960s.

Starr was the leading maker of American swords from 1798 through 1830 when he produced edged weapons for the military. This stout cavalry saber is a no-nonsense enlisted man’s edged weapon and one of approximately 5,000 such pieces made under the Starr contract of 1812-1813.

Nathan Starr of Middletown Connecticut entered into a contract with the U.S. Government on March 14, 1812. This order for Horseman’s sabers was as follows:

“….Nathan Starr shall and will manufacture, and deliver….five thousand horseman’s swords, which shall be good, effective, and fit for military service…..to the pattern sword made by Rose”

Colonel Burn Regiment of light Dragoons deployed from Albany to the Niagara Frontier and the Campaign against Fort George on the 25th of May, 1813. This action resulted in the Battle of Stony Creek on the 5th of June, 1813.

This example measures 38-1/2 overall length with a 33-1/2 inch blade showing a flat back clip at the tip and “P/HHP/NSTARR” on the ricasso. The HHP initials stand for Ordnance Inspector Henry H. Perkins.

The overall condition is good. Mostly bright blade, some surface pitting. Solid hilt all around (missing the wire wrap, good tight leather). The scabbard is in good shape.