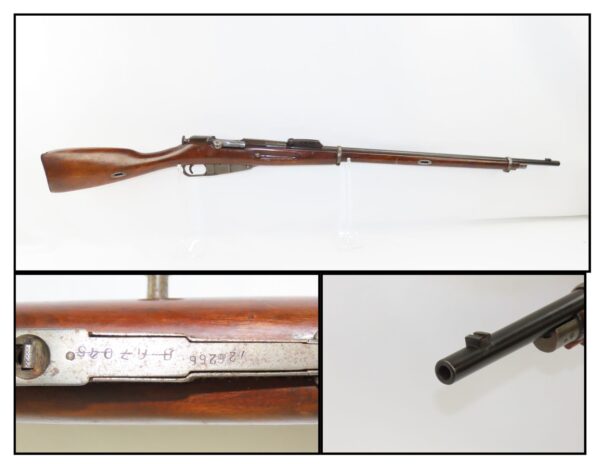 Here we present a Remington Imperial Russian Contract Model 1891 Mosin-Nagant Rifle, made in 1917 in Ilion, New York. This rifle was manufactured by the Remington Arms Company under contract with the Imperial Russian government. Even though the Russians were buying rifles from anywhere they could, they couldn’t keep up with the demand and they were suffering extreme losses at the front. There were simply not enough rifles to go around and the Russian soldiers were getting slaughtered. So, in 1915, the Tsar’s emissary ordered a million and a half M1891 Mosin Nagants from Remington with matching bayonets and another one million and eight hundred thousand from New England Westinghouse.

Remington had produced just under eight hundred and fifty thousand guns between 1915 and 1917 with only a little more than one hundred and thirty thousand having reached Russia by January of that year and of the seven hundred seventy thousand guns Westinghouse made, a quarter-million of those had made it to its destination by the time the Tsar’s government was overthrown the next month. A period of chaos broke out and by the time the Bolsheviks took charge, they defaulted on their contract to Remington and Westinghouse, claiming the guns were substandard, which was hardly the case. In reality, the Russians had neither the necessary funds nor willingness to pay for the rifles.

The overall condition is very good. The action is strong. The bore is bright. This example sports a solid stock.  The barrel is dated “1917”. This rifle will display just fine in the WWI Collection!