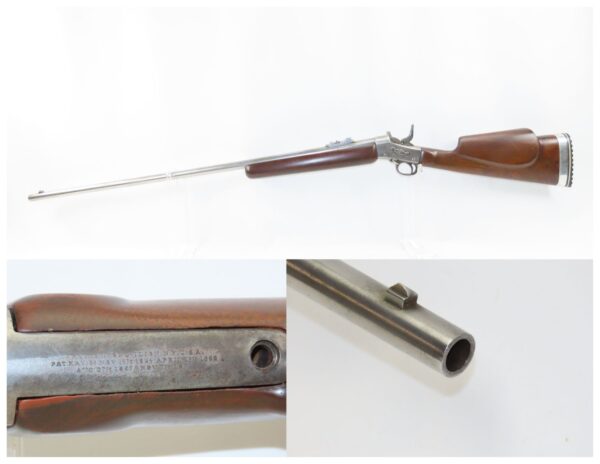 Here we present an Antique Remington Arms Company Rolling Block Rifle, made circa the 1880s in Ilion, New York. The Remington rolling-block cartridge rifle was so popular that more than half the world’s armies adopted it or purchased quantities for police or martial purposes. During the American Civil War, gunsmith Leonard M. Geiger designed the basic action, in which the shooter “rolled” the breechblock backward with the thumb and inserted a cartridge in the breech, before the block “rolled” forward, and the interlocking hammer cocked in one fluid motion. E. Remington & Sons, America’s oldest firearms manufacturer, took over Geiger’s patent and assigned one of its chief engineers, Joseph Rider, to make the necessary refinements. Rider brought the new action along, and with his 1864 and 1865 patents, put it in its nearly perfect final form.

“With your rifle I killed far more game than any other single party [on the Yellowstone Expedition]…while the shots made from your rifle were at longer range and more difficult shots than were those made by any other rifle in the command….I am more than ever impressed with the many superior qualities possessed by the system of arms manufactured by your firm, and I believe I am safe in asserting that to a great extent, this opinion is largely shared.”

Those were some of the comments made by Lieutenant Colonel George A. Custer in an October 5, 1873, letter to E. Remington & Sons of Ilion, New York. Less than three years after the Remington company received his letter of kudos, George Armstrong Custer took his cherished rolling-block sporting rifle on what would be his last campaign. On June 25 at the Little Bighorn in Montana Territory, Colonel Custer and his immediate command were wiped out, and his Remington rolling block, probably the most famous one of all time, was lost forever from the pages of history.

The overall condition is very good. Strong action. Bright and nicely rifled bore. This example has been restocked and is quite handsome. The trigger guard tang screw is missing (stable).