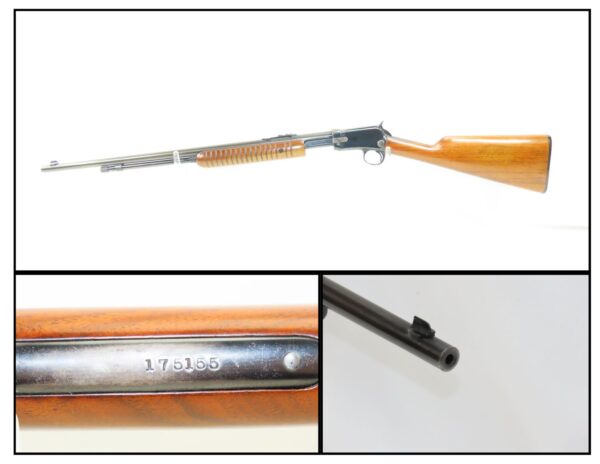 Here we present a C&R Winchester Model 62 Slide Action Rifle manufactured circa 1946 in New Haven, Connecticut and chambered in the scarce .22 Short. When the Model 1890 and 1906 were dropped from production in 1932, Winchester introduced the Model 62 to take their place. Winchester offered this Gallery version chambered for the .22 short only. With its roots dating back to the 1890s, the Model 62 is considered the best in a long line of .22 caliber pump action rifles. These handy little guns taught many a young shooter how to use a rifle and proved to be the weapon of choice to plink tin cans or spin the pinwheels at carnival shooting galleries on a warm summer day. This little rifle was basically just an upgrade to the Model 1890 designed by John Moses Browning that came out 72 years earlier in which 1.6 million had been made by 1932. Unlike the 1890, the Model 1962 was made to shoot .22 short, long, and long rifle cartridges, with very few being made as “Gallery Guns” to shoot only .22 Shorts. The Model 62 was also designed as a “Takedown” rifle. An oversized screw on the rear of the receiver, when removed, allowed the gun to break apart into two pieces for cleaning, storage, and transport. The Model 62 evolved into the 62A in the late 1930s.

These guns were durable and well liked. However, they didn’t have the commercial success that its predecessor did. This is largely in part because the new semi-auto rimfires rifles were similarly priced, and competitors like Colt had gathered a good bit of the market. Overall, just 409,000 Model 62s were made before Winchester pulled the plug of the handy little guns in 1959. This is a very scarce little gun estimated that no more than about 3 percent of the total Model 62/62A production was for the .22 Short cartridge.