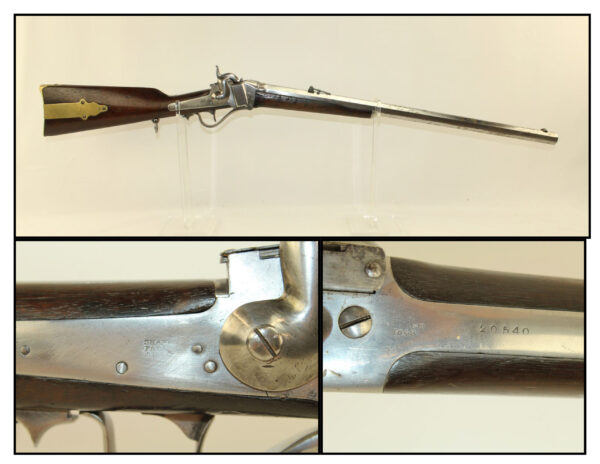 Here we present an antique Sharps Model 1853 Slant Breech Percussion Rifle, made circa 1856 in Hartford, Connecticut. The carbine version of the Sharps Model 1853 is known for their iconic role in the abolitionist movement, both in the hands of John Brown during his raid of Harper’s Ferry Arsenal, as well as those of Henry Ward Beecher, who said of the Sharps “that there was more moral power in those instruments, so far as the slaveholders of Kansas were concerned, than in a 100 Bibles”. These powerful, accurate and reliable rifles certainly saw history from a firsthand perspective during the conflicts leading up to the Civil War, the war itself, and beyond on the frontier.

This specimen is a heavy barreled, sporting rifle in .44 caliber. Only 2,970 were made, with 2240 of those with octagon barrels. Also includes the Sharps pellet priming system, which could be loaded into a spring-loaded magazine and used instead of the “hat” variety of percussion caps. From hunting buffalo to battles between European Americans and Native Americans, the Sharps made a name for itself as a rugged, powerful and accurate long arm for the rest of the 19th century.

The overall condition is very good. The iron parts are bright. The markings are mostly clear. The walnut stock is in good shape, showing honest wear. The bore features strong rifling. The action is excellent. Here is an excellent, scarce and historic firearm!