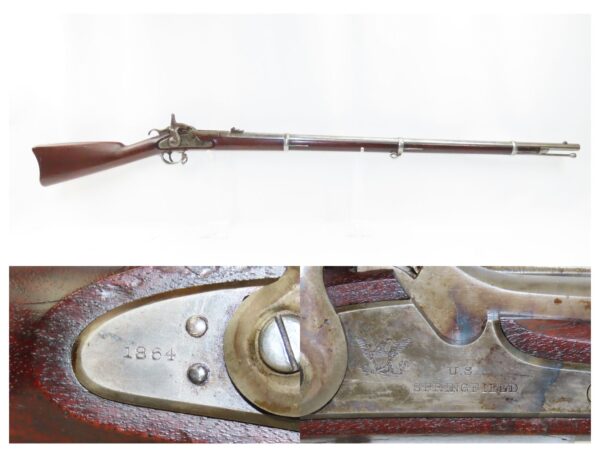 Here we present an antique Robert’s Conversion of a Springfield Armory U.S. Model 1863 Type II Rifle-Musket, manufactured circa 1864 in Springfield, Massachusetts and converted by the Providence Tool Company in Providence, Rhode Island circa 1869-70. The Model 1863 was only a minor improvement over the Springfield Model 1861. As such, it is sometimes classified as just a variant of the Model 1861. The Model 1863 was produced in two variants. The Type I eliminated the band springs and replaced the flat barrel bands with oval clamping bands. It also featured a new ramrod, a case-hardened lock, a new hammer, and a redesigned bolster. The Type II is sometimes referred to as the Model 1864 but is more commonly referred to as just a variant of the Model 1863. This version re-introduced band springs, replaced the clamping bands with solid oval bands, and replaced the three-leaf rear sight with single leaf sight. A total of 255,040 of these were manufactured from 1864 to 1865.

The musket was converted to a breech loading cartridge rifle by the Roberts Conversion System. Union General Benjamin S. Roberts invented the conversion system, which utilized his own .58 Roberts center fire cartridge, and submitted samples produced under his patents to the United States Ordnance Board breech loading rifle trials. Those trials that eventually chose the Allin conversion system to modify the existing stock of U.S. muzzle loading rifle muskets to breech loading cartridge rifles. While the United States Ordnance Bureau did not adopt the Roberts system, the State of New York was suitably impressed during their own breech loading rifle trials and in 1867 placed and order with Roberts for 10,000 of the altered rifle muskets. New York provided the guns to be altered from those that they had in store in arsenals around the state. Roberts contracted with the Providence Tool Company of Providence, Rhode Island to fabricate the necessary parts and perform the alteration to the muskets. Unfortunately, in 1869 the New York legislature refused to fund the purchase, leaving Roberts on the hook for the work already performed by Providence Tool, which included 2,000 completed arms. Roberts quickly searched for a new buyer and managed to arrange a contract with the State of South Carolina to purchase 5,000 of the altered guns to arm their National Guard regiments. The Providence Tool Company also sold a number of the altered muskets to France in wake of the Franco Prussian War, and apparently many of these arms were P-1853 Enfields that had likely been in store in New York State Arsenals and had been intended to be part of the original New York conversion contract. The vast majority of the alterations were performed on Springfield (and contract makers) U.S. Model 1861 and Model 1863/64 Rifle Muskets.

The overall condition is fine. Original finish/case colors/patina. The cartouches are crisp and clear. The action is excellent, and the bore is brilliant with sharp rifling. The walnut stock is smooth and solid throughout, though there is a repaired crack in the underside of the stock extending from the front lock plate screw head, past the tip of the front of the trigger guard. The repair is solid. A very rare piece from the period when everyone was off to the races trying to invent the next big thing in military hardware: the metallic cartridge conversion that would be adopted!