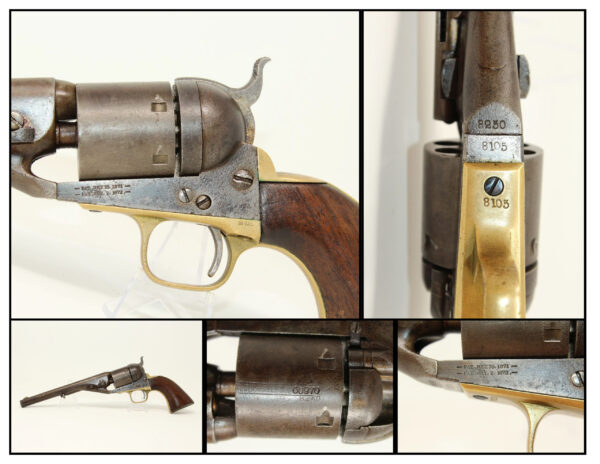 Here we present an antique Colt Model 1861 Navy Revolver, made in 1862 during the American Civil War and converted to .38 Long Centerfire for the U.S. Navy in the 1870s using the Richards-Mason system. Estimates are that maybe a couple thousand were converted for Naval use. The American Civil War was a period marked by new firearm technology as militaries transitioned from the percussion firing system to the metallic self-primed cartridge. While single-shot muskets were converted into “trapdoor” or breech-loading single shot rifles, handguns were likewise being improved to utilize the latest technology. Updating was certainly less costly than purchasing completely new inventory, especially when the seemingly insatiable appetite for arms caused by the Civil War was suddenly sated and the men went home and the quartermasters were inundated with their weapons. These were the precursor of perhaps the most famous Colt revolver of them all, the Single Action Army.

While the Army busied Colt with their .44 caliber revolvers, the Navy likewise sent in their 1851s and 1861s in .36. This is the result. As can be seen here, most specimens are found with 4-digit serial numbers, and mixed serial numbers were just fine with Naval inspectors. This one features two primary sets of numbers. You will notice the cylinder bears its original number as well as a number under it that matches the number on the barrel assembly. The gun is marked with the Navy inspector’s initials and the anchor: “R.W.M.” for Commander Richard W. Meade. The “COLTS PATENT” marking has been over stamped with the patent dates for the Richards-Mason conversion on the left side of the frame. Like the SAA would have, this revolver has an ejector rod mounted to the barrel as well as a loading gate behind the cylinder. This specimen is unique from others of its type in that the grip frame has been drilled and tapped for attachment of a separate stock, turning this revolver into a very handy carbine. This piece is a wonder to study and represents the transition of the US military from the percussion revolvers to the Single Action Army.

The overall condition is very good or better. There is still a visible Battle of Campeche cylinder scene. The blue finish has turned plum with age. The markings are clear. The walnut grip is smooth and solid, showing honest wear. The bore is in great shape with sharp rifling. The action is excellent. This is a fantastic Colt revolver that allows you to see the development of Colt’s ultimate single action revolver!