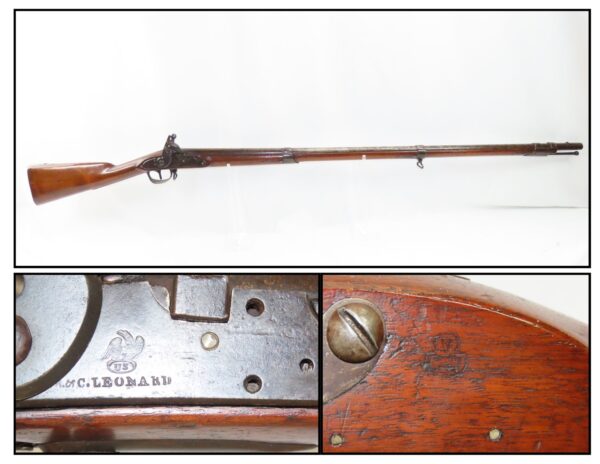 Here we present an antique R&C Leonard Contract Model 1808 Pillock Conversion Musket, manufactured circa 1812 in Canton, Massachusetts. R&C Leonard was one of 19 gunmakers contracted by the U.S. government to manufacture the Model 1808 Musket. Leonard manufactured approximately 5,000 Harpers Ferry Pattern Model 1808 Contract Muskets in the flintlock firing system. This musket was converted to the pillock system circa the 1830s. The “pillock” system was much like the percussion system, except the user loaded a small “pill” of mercury fulminate into the chamber along with a load of powder and bullet. The hammer would strike the pill, igniting the charge. In this case, the flash pan and accoutrements were removed, a bolster installed in the old vent, and, rather than replace the cock with a purpose-made hammer, an iron hammer was fitted into the jaws of the cock that aligns just perfectly for impact within the bolster to detonate the fulminate pill. A very neat bit of handiwork.

The War of 1812 was a conflict lasting about three years that was fought between the United States and the United Kingdom of Great Britain and Ireland. The conflict began when the United States declared war in June of 1812 and ended in a restoration of the pre-war status quo when a peace treaty agreed to earlier was ratified by the United States in February 1815. Its eventual consequences included the establishment of a separate Canadian state and an end of hopes for an independent American Indian confederation in the Northwest opening the way for the western expansion of the US.

The lock is marked “R&C LEONARD” below the primitive US eagle and “CANTON/1812” at the tail of the lock. The left side of the barrel bears a “V” view mark, “US” acceptance mark, and an eagle head/OT within an oval. The lower sling swivel is mounted on a stud ahead of the trigger guard. The barrel bands are secured by springs behind the bands. Mounted with a full one-piece black walnut stock with the distinctive Harpers Ferry high comb and iron butt plate.

The overall condition is very good. Strong action. Good, smooth bore just as it came out of the attic. The stock is in great shape. There is a visible cartouche on the left side of the stock. Here is a great early American flintlock musket with a rare American pillock conversion!