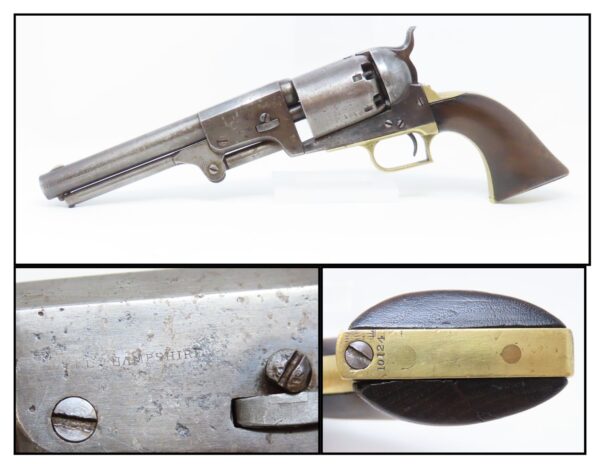 One of Around 300 New Hampshire Guns!

Here we present an antique U.S. Issue Colt 2nd Model Dragoon Revolver, manufactured in 1851 in Hartford, Connecticut. Colt produced about 2700 2nd Dragoon Revolvers between 1850 and 1855 and sent approximately 300 of those guns to the New Hampshire and Massachusetts Militias. The left side of the barrel is marked “NEW HAMPSHIRE”. These Dragoons fell into the serial number range of 10,000 to the early 11,000s. At least part of an Army contract for 1000 revolvers dated February 4, 1850 was filled with 2nd Dragoon Revolvers. These would inevitably go on to see service during the American Civil War.

The revolver has the distinctive combination of square-back, brass, trigger guard and rectangular cylinder stops found only on the 2nd Model Dragoons and has the V-shaped mainspring used to about serial number 10,000. The half round barrel is marked: “-ADDRESS SAML COLT NEW-YORK CITY-” reading from the muzzle to the breech. The left front of the frame is roll-stamped: “COLT’S/PATENT/U.S.” in three lines. The full serial number, “10124” is located on the barrel lug, cylinder arbor pin, frame, trigger guard, backstrap, cylinder and loading lever.

Colt’s Dragoons experienced some of the harshest conditions the mid-19th century had to offer, and it is amazing that any survived, in any condition. This pistol was designed for use by horse-mounted rifleman, and it is so much pistol that you will want a horse to carry it for you because of its significant weight. This one would have seen use during the American Civil War.

The overall condition is very good. The action (hammer/trigger) is strong and the cylinder advances appropriately, though lockup is imperfect. The bore is in good shape. The grip is firm despite the minor hairline crack on the bottom of the right side. This is a great opportunity to add one of Samuel Colt’s most recognized inventions to your collection, an extremely rare New Hampshire Militia Issued Colt 2nd Model Dragoon!