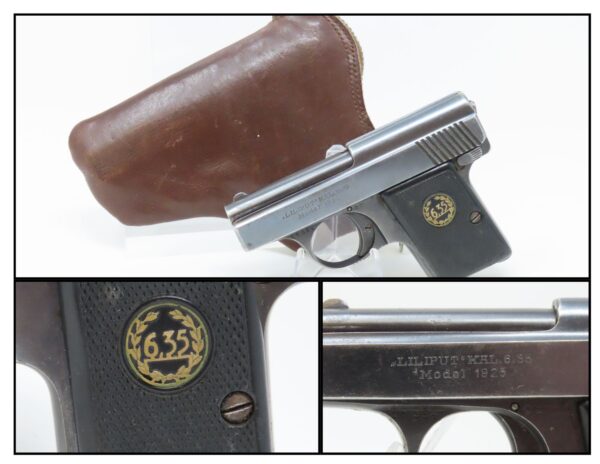 Here we present a German August Menz “Liliput” Model 1925 Model 1 Pistol, manufactured between 1925 to 1927 by Waffenfabrik August Menz in Suhl, Germany chambered in 6.35mm. The name Liliput is derived from the fantasy island of Lilliput, as you’ll read in Jonathan Swift’s 1726 novel, “Gulliver’s Travels.”

According to an Allied report by then Staff Sergeant Ib Jørgen Melchior who was in the CIC (Counterintelligence Corps of the US Army), a Liliput pistol was issued to members of the Werwolf resistance force. Melchior wrote this report after he captured 6 officers and 25 enlisted German soldiers in Schönsee, Bavaria, 28 April 1945, just days before the official German surrender (7 May 1945). An excerpt of the report is below, and it is fascinating reading!

Operations were to begin three or four weeks after being overrun by US troops. The plan was for each unit to receive designated targets from the headquarters. Bands of from 10 to 20 men were then to be sent out to destroy the target and to return immediately to their unit. No targets were to be located nearer than fifteen kilometers to the unit. Secrecy and camouflage were relied upon for security and all personnel had strict orders to conceal themselves if US troops came into their area and under no circumstances to open fire in the bivouac area. No routes of escape had been planned. Members of the unit usually wore the Wehrmacht uniform, but a few members disguised themselves as foresters and were used as outposts to report any approaching danger. Their ordnance supplies consisted of mortars, machine guns, sub-machine guns, rifles, and various types of side arms. Each man was issued a Liliput pistol which could be very easily concealed on the person. The ammunition supply for each type weapon was ample for four months of ordinary operations. The unit had one civilian type sedan and one Wehrmacht motorcycle which were well hidden in the woods, and 120 horses which were dispersed on farms throughout the vicinity. Food consisting of canned meat, biscuits, crackers, chocolate, and canned vegetables was sufficient for over four months. Additional food supplies such as bread, potatoes, fresh vegetables, and smoked sausages were obtained from local sources. The unit was supplied with water by a brook passing through the area. Dugouts were constructed in such a manner as not to destroy the live trees around them. The dugouts were located on the slope of a hill which was densely covered with fir trees … The entrance to the dugout was a hole approximately 24 inches in diameter and four to five feet deep. Approximately two feet down, this hole extended horizontally to a length of eight to ten feet. The dugout has a capacity of three men and has a wooden floor and a drainage ditch. Walls and roof are reinforced with lumber.

SSG Melchior would be awarded a Bronze Star for this event. He also participated in the liberation of the concentration camp at Flossenbürg and the location of the cache of money, bullion and art in the cave at Merkers-Kieselbach.

The overall condition is fine. Great blue finish. Both grips feature the unique “6,35” cartridge designation emblem and remain in very good shape. The action is excellent. The bore is in very good condition with nice rifling. This includes a fine leather, zippered case or holster.