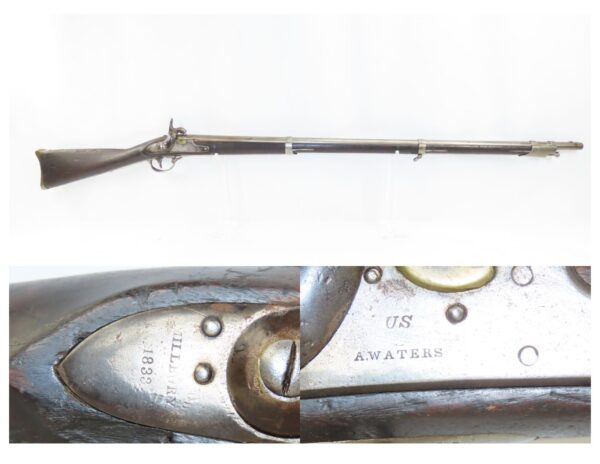 Here we present an antique Model 1816 Massachusetts Militia Percussion Conversion Musket, made in Millbury, Massachusetts circa 1833 and converted circa 1851. This period of United States history saw quite a small national standing army and hosts of statewide militias. These were meant for repelling foreign invasion, creating a barrier between states and the federal government, defending towns from attack and uprisings from Native Americans, slaves, and bandits, among other policing duties. Militias were sometimes longstanding, prestigious and influential organizations. At other times they were ad hoc and reactive to the given circumstances. There was a great distrust of a federally controlled militia system or a large standing army in the early days of the Republic.

This musket was contracted to be made by Asa Waters Jr., a very successful businessman in Millbury, Massachusetts, who learned gun making from his father. He and his brother established their own gun making firm. He went on to go into banking and politics. The Georgian Colonial-style mansion that he built for his wife, beginning in 1824 still stands today and has been called “the finest example of Georgian Colonial style in the country.” The materials alone took two years to gather. His contribution to the federal and state supply of Model 1816 muskets was about 36,000 over a 21-year period. This number in contrast to the 675,000 produced at the two federal armories.

There were only 300 of these conversions performed by Eli Whitney sometime around 1851. This included a thinned buttstock and a heavy brass buttplate, which this example is marked “55” on the top tang and “B” on the left side, indicating a rack/inventory number. Most observed will be Whitney muskets but other specimens from other contracts have been known.

The overall condition is good. Strong action. The bore is in good shape (aged). Solid stock with an above amount of wear (dents, dings, and a stable crack over top the wrist). “1883” and “US/A. WATERS” is marked on the lock. A bit of a cartouche remnant remains on the left wrist and a militia type “P” is marked on the breech. A nice example of a rare gun.