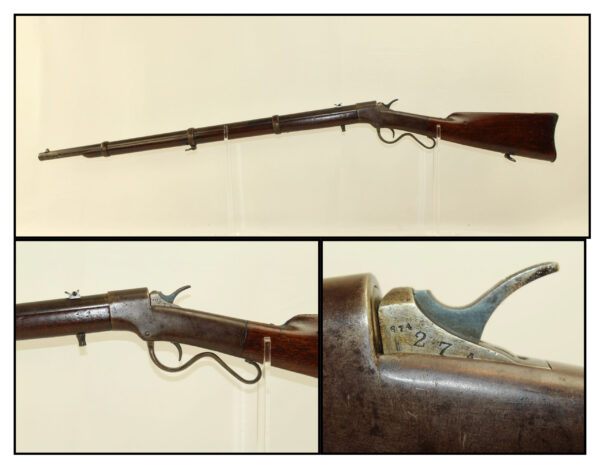 Here we present an antique Ball & Williams Ballard Infantry Rifle, made in 1864 of Worcester, Massachusetts. The Ballard is an interesting rifle in that it began its career during the American Civil War, when it was produced in relatively small numbers (only about 24,000 from 1862-1873) by five different manufacturers. It was ultimately made a commercial success when made into one of the staples of the Marlin Company. Charles H. Ballard invented the rifle and the famed arms agents Merwin & Bray secured government contracts and lined up the firearms companies to make them.

This example is one of only 3,000 that was purchased by the highly contested state of Kentucky during the conflict. This rifle features a long (30 inches), round barrel, chambered for the .46 rimfire cartridge. The front sight is an adjustable blade, and the rear sight is a two-leaf variety. Each of the various ranges on the rear sight are clearly labeled: “100YDS” in the short leaf notch, “250YDS” for the long leaf aperture notch, and “500YDS” for the long leaf notch at the top. It also features a spring-loaded manual ejector, the knob of which you can see below the forearm. This rifle, while not being a repeater, was a huge improvement over the muzzle loading rifle-muskets being issued en masse to most soldiers of the war. It was much shorter than the rifle-muskets and used rimfire cartridges, making it faster and more reliable to shoot and handle. In fact, this rifle is only about 8 inches longer than most Civil War carbines.

The overall condition is very good. The iron parts bear about 25% of the original blue finish with a plum patina throughout. The markings are legible. The numbers match. The walnut stock is in very nice shape. The bore is in good condition, clean with a frosted appearance and visible rifling. The action remains excellent. Here is a nice example of a rare and desirable Civil War rifle, issued to Kentucky state units in 1864.