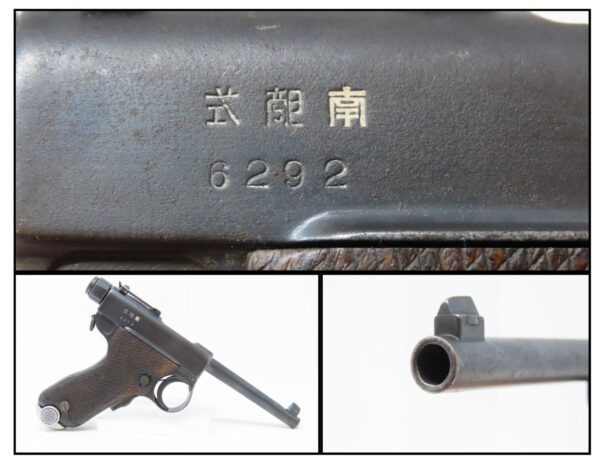 This example is a very scarce Model 1904 Large Nambu pistol commonly called the Papa Nambu. There were only approximately 7,000 total made before production changed over to the later standard Type 14 model. This example was produced under an Army contract. These pistols were equipped with adjustable tangent rear sights on top calibrated from 100 to 500 meters, and a triangular front sight. It is recommended that these pistols are not dry fired often, as the firing pins are fragile (this example is intact!)

The first type of Nambu that was produced was the Type A. Type A Nambus were produced from 1903-1906 and had differences from those produced after 1906. And, among collectors, the original Nambus are commonly referred to as Grandpa Nambus. The ‘Grandpa’ Type A was produced until around serial number 2400. A later version of the Type A Nambu, the Type A Modified, also known as the Papa Nambu, was produced until around serial number 7000. Production of the Type A Nambu ceased as of 1923 and was replaced by the Type 14, which was both cheaper and more effective. The Nambu Type A somewhat resembles the Luger pistol in appearance, but this is superficial, and this mechanism is unique.

The overall condition is good. Original finish/patina. Strong action, that is truly one of a kind. The bore’s rifling is quite worn, and the interior is patinaed. Both grips are in good shape with an expected amount of wear. Clear marks (right frame Japanese characters translate to “NAMBU TYPE” while the left translate to “ARMY TYPE”). The numbers match on the frame and trigger assembly. The magazine, bolt knob, and firing pin are all different numbers. Fully functional adjustable 500 meter tangent sight. A very difficult to find Japanese pistol from the World Wars!