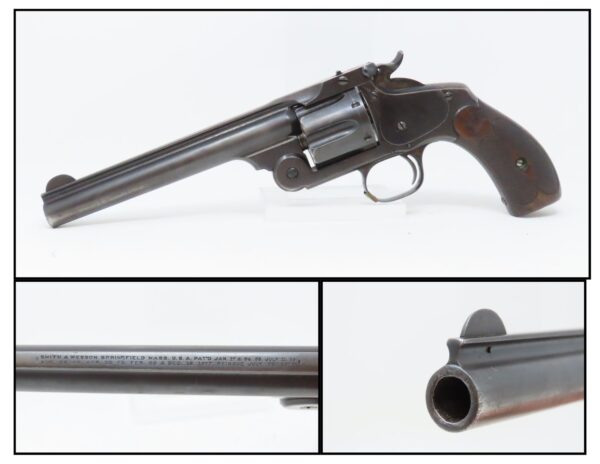 Here we present an antique Smith & Wesson New Model No. 3 Frontier .44 Single Action Revolver, manufactured circa 1886. This revolver began life chambered in the very popular (in America) .44-40 WCF. However, it was later converted to .44 S&W Russian by the factory per the wishes of their Japanese buyer. Smith & Wesson: 1857-1945 by Neal & Jinks shows that this one is within the serial number range of revolvers converted in this manner. The Japanese were in the midst of modernizing ever since the island nation was forced to interact with the world when American Commodore Perry arrived in 1854. Japanese neighbor and rival, Imperial Russia, had just adopted the Smith & Wesson No. 3 in .44 Russian, and thus Japan adopted the No. 3 in the same cartridge.

These revolvers in general are remarkably interesting in that all frames for this model were made by 1898, though production began in 1885 and continued until 1912. Smith & Wesson revolvers, then as now, are some of the finest in the world. Excellently machined, well-proportioned and accurate. It is no wonder why so many records of the era were set with this revolver. Notable shooters and owners of the original No. 3 include Buffalo Bill Cody, Ira Anson Paine, F.E. Bennett, Annie Oakley, Frank Butler, General George Custer and Theodore Roosevelt.

The overall condition is near fine. Nice blue finish. The serial numbers match throughout to include both grips, the frame, latch, and barrel. The only number that does not match is that of the factory replacement cylinder. The action is strong and tight. The bore is bright throughout with sharp rifling. Both grips are firm with expected handling wear across the checkering. A small brass tag with Japanese characters is pressed onto the front of the trigger guard bow.