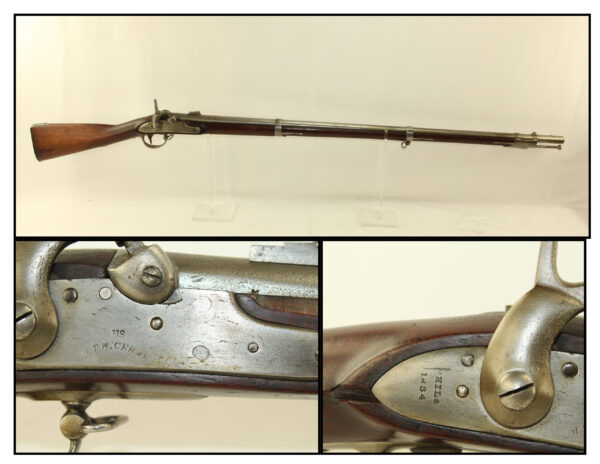 Here we present an antique Hewes & Philips Armory Rework of a Wickham Model 1816 Musket for the state of New Jersey in 1861. This musket was originally manufactured in Philadelphia, Pennsylvania by Marine T. Wickham in 1834 before it was converted to percussion by Hewes and Phillips circa 1861. While many M1816 flintlock muskets saw conversion to percussion in the Civil War period, almost no other saw the level of update this musket received. The flash pan and frizzen were removed from the lock and all the holes filled and ground down flush with the face. You will notice that the markings were also slightly effaced in the process. A very large bolster was welded to the barrel and a percussion nipple threaded in. A percussion hammer that is unique to this model was installed. The barrel was rifled. A new front barrel band replaced the old so that there was a good front sight for the rifle and a mutli-leaf sight was installed at the rear. A bayonet lug was installed on the top near the muzzle. Hewes & Philips numbered their parts and you will see the number “12” throughout, to include the nipple bolster, the hammer, the bayonet lug, etc. The top of the barrel shows the company markings “H&P” and the date of the conversion 1861. A large “P” on the barrel and a long cartouche at the rear of the comb of the stock are probably New Jersey inspector markings. A large “NJ” for New Jersey is also visible where the barrel meets the stock on the left side. This is a fantastic piece for so many reasons, and is the epitome of a musket that saw lots of use.

The overall condition is very good. The stock has several stable cracks throughout. It does not look like these are from an impact, rather green wood may have been used by this contractor in their effort to get guns out the door, as happened with other contracts. The bore is in great shape with nice rifling. The action is excellent. This one is a cut above other conversions.