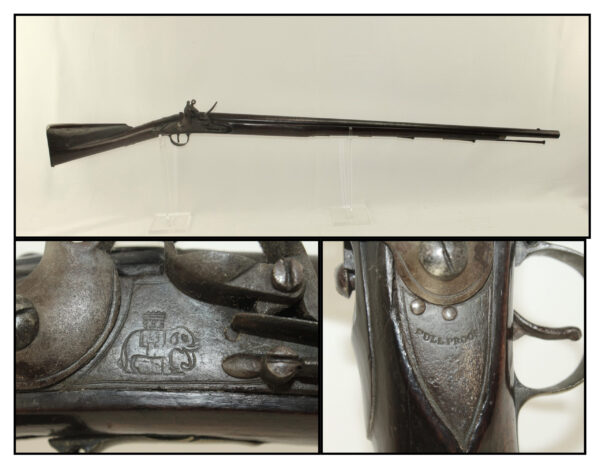 Here we present an antique Birmingham Made Brown Bess Flintlock Musket, Marked “FULL PROOF” with an elephant with a howdah on its back on the lock, made circa the 1820s. This pattern is the same that fought Napoleon Bonaparte in numerous iconic battles, as well as the United States and their American Indian Allies during the War of 1812. This pattern may also correctly be called the “India Pattern” since the Honorable East India Company was the entity responsible for this update to the gun that had been around since 1722.

This flintlock musket bears the hallmarks of being produced in Birmingham during the 18th and 19th centuries for export throughout the British Empire. The Royal African Company, established in the late 17th century, supplied muskets to the continent and the East India Company to Southeast Asia. The elephant marking is quite similar to the “elephant and castle” marking on the guinea. However, a similar marking was also used by the Danish Order of the Elephant and Brown Bess muskets are known with Danish markings on them.

The overall condition is very good. The iron parts have a dark and even patina. The markings are clear. The walnut stock is smooth and solid. There is a stable split on the left side that appears climate related and ends before reaching the edge of the stock. The joining of the stock with the barrel tang experienced some trauma during its period of use and has smoothed out and darkened with age and handling. The bore is smooth and dark. The action is excellent. Here is a Brown Bess variant seldom if ever encountered!