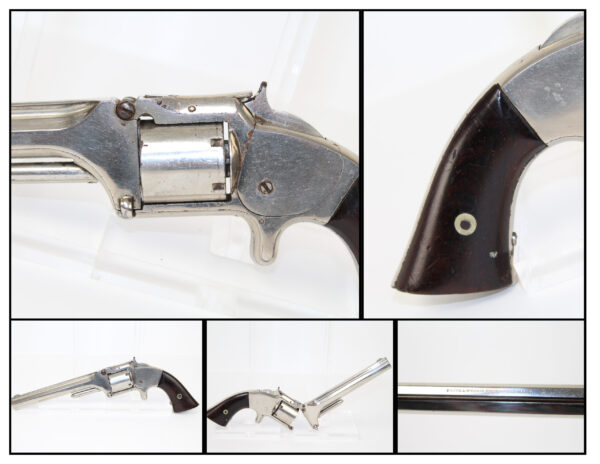 Here we present an antique Smith & Wesson Model No. 2 Old Army Revolver, made circa 1860’s in Springfield, Massachusetts. Smith & Wesson purchased the rights to the Rollin White patent for the bored through cylinder, which would forever change the development of revolving firearms. Beginning in 1857 they produced the Number 1, a 7-shot .22 rimfire pocket pistol, which was quite successful. This was fine for the commercial market, but S&W knew they could scale up their design for a pistol that could be worn on the belt in a holster. They began shipping their Number 2 “Army” Revolver, a 6-shot .32 caliber, just 2 months after the beginning of the American Civil War. Smith & Wesson continued to leverage their patent well beyond the war and they remained very popular with the public and on the frontiers.

This revolver bears an early serial number that falls into the range of those many purchased by the state of Kentucky during the Civil War. It also bears the early feature of having the cylinder stop held into place on the top strap by two pins, whereas more were added in later variants. Only those found through the 3000 range have this distinguishing feature.

The overall condition is fine. The nickel plate was applied after the revolver left the factory and is 98%. The markings are clear and legible. Numbers match, including the very nice, original rosewood grips. The bore is clean with sharp rifling. Part of the hammer spur was broken off as they were prone to do. The owner cleaned up the edge. The action is excellent. Here is a rare, early Civil War Smith & Wesson revolver for your collection!