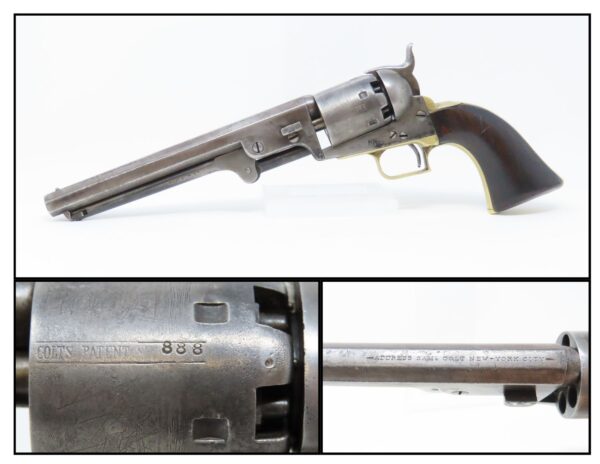 Here we present a First-Year 1st Model production antique Colt Model 1851 Navy Revolver, made in 1850 in Hartford, Connecticut. This extremely rare revolver is one of about 900 Model 1851 Navy revolvers manufactured with the barrel wedge positioned over the screw. This antique percussion Navy is also equipped with the square back trigger guard, which only came on the first model (SN 1-1250) and the second model (SN 1251-4200) 1851 Navy revolvers. With over a quarter of a million 1851s produced, only 4200 squarebacks were made, this is a very rare and sought-after gun. The barrel address is a single line New York City address that is correct for the serial number.

The Colt Model 1851 Navy, first known as the “Ranger Model” and also known as the “Revolving Belt Pistol of Naval Caliber”, was designed between 1847 and 1850, manufactured from 1850 until 1873, and was the second most popular Colt percussion revolver after only the Model 1849 Pocket. Though its name implies maritime use, most Navy revolvers primarily saw use on dry land, including in the Old West, which truly, the Colt 1851 Navy revolver ushered in the era of the gunfighter. Among the many guns that were used on the western frontier, none was more popular in its day than the Colt percussion revolver designated the 1851 Navy. This single action revolver weighed in at roughly 42 ounces. Prior to the Navy’s introduction, hand gunners had to make do with the Colt Walker and Dragoon revolvers, both of which weighed over four pounds. These big guns were best suited for carry in pommel holsters on the saddle. The Colt Navy was the first popular single-action revolver that could be worn comfortably on the belt. Prior to the beginning of the Civil War, the state of Missouri was a hotbed of trouble that often broke out in shooting fights. Bill Anderson, Jesse and Frank James, and the Youngers all cut their teeth on this border trouble and were ready to go when leaders like William Quantrill enlisted them in his guerilla band during the war. The boys from Missouri became quite proficient with their six-guns and generally carried a brace of Dragoons on their saddle pommels and a brace of Navy revolvers on their hip.

The 1851 Navy was one of Colt’s most famous and successful lines, reaching a production total of 257,348 from 1850 to 1873 (right up to the time of SAA production) from both Hartford and London factories. From Hartford alone, 185,000 were made by the end of the American Civil War. Many of these saw service during the conflict on both sides. There were some military purchases and lots of private purchases by soldiers going off to war. In addition, the Model 1851 was carried by Confederate General Robert E. Lee and was a favorite of “Doc” Holliday and “Wild Bill” Hickok, who carried two of these most famously in his red sash.

The overall condition is very good. The action is strong. The bore is in good shape, nice rifling with a patina. The grip is firm and remains in good shape. The serial number “888” is very early and matches throughout. The Battle of Campeche cylinder scene is intact and legible. This is a true rarity in Colt collecting. If you want all the variants of the 1851 Navy, this is a great opportunity to get one of the most difficult to find!