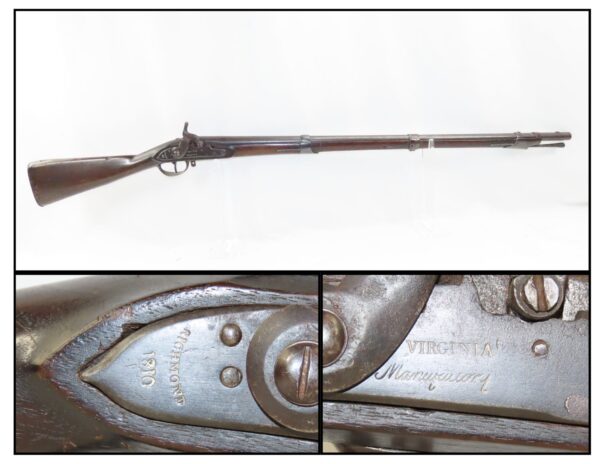 Here we present a Rare Antique Virginia Manufactory Short Musket or Carbine, originally made in Richmond, Virginia circa 1810 and converted around the time of the American Civil War. The Short Musket and Carbine terminology was interchangeable to the Manufactory. While the Manufactory was by and large producing full-length muskets for the state’s militia units (42-44” barrels) the armory also made shorter length muskets with 36-39” barrels. These were adopted, according to Giles Cromwell in his book The Virginia Manufactory of Arms, due to two factors: “First of all, economy forced the use of those barrels that did not finish out at the customary 42- of 44-inch lengths. These shorter barrels were cut to the closest 36 or 39 inches and stocked along with the rest of the longer barrels.” In addition, there came a policy of simply shortening barrels of muskets that had burst their barrels in the course of proofing. These were considered handier weapons for the Artillery or Light Infantry. Some were even “loaned to certain boys’ schools, such as the Norfolk Academy, the Rumford Academy in King William County, and the Fleetwood Academy in King and Queen County, for training purposes.

This piece’s lock is dated 1810 while the barrel is dated 1821. This is due to the fact that the Manufactory produced a surplus of lock that were still being used up at the very end of production in 1821 (this is the same year the Manufactory closed). The left side of the barrel is marked with an eagle’s head and “P” proof mark within an oval. It has a drum type of conversion and a replacement hammer. The face of the lock plate was stripped of the old flintlock hardware and the holes filled and filed. The ramrod appears to be from the period but was broken off a bit short and has a bit of a wave to it, suggesting it may have been used for other purposes. Sling swivels were removed and the barrel band with the front swivel filed down.

Being specifically made for Virginian militia by its own state armory these converted muskets are considered Confederate weapons during the American Civil War. According to Giles Cromwell, these muskets were not updated until the war began in 1861. This one appears to have had one of the armory conversions with the large bolster installed. However, the original nipple bolster was removed (or perhaps knocked off) at some point and it then received a “drum” type bolster.

The overall condition is very good. Robust action. The markings on the lock plate have been filled with a small amount of white paint. Smooth bore. The stock is solid despite the chipping around the lock and other evidence of use. “1810” dated lock. “[18]21” is marked on the barrel tang. A fantastic piece of history!