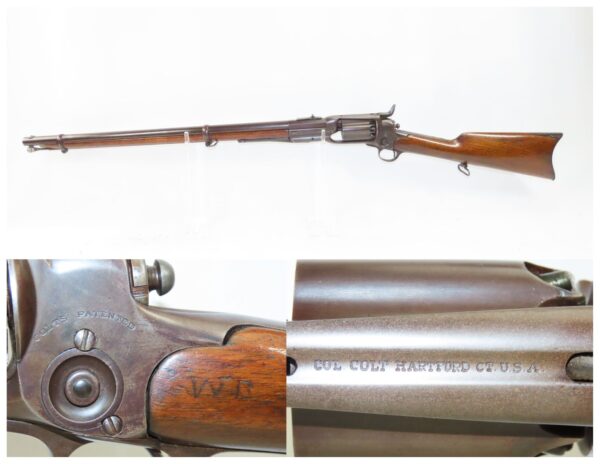 Here we present an antique Colt Model 1855 Full Stock Revolving Sidehammer Percussion Rifle, manufactured circa 1855 through 1864 in Hartford, Connecticut. About 9,310 estimated produced. Most of us have seen a Colt “Sidehammer” revolver, but few have had the pleasure of seeing a fully stocked Sporting Rifle. These sidehammers also go by the nickname “Root” thanks to the involvement of Elisha K. Root, who was instrumental to the early success of Colt Manufacturing. These rare revolving rifles have much in common with their other sidehammer brethren (the revolvers, military rifles, half stock Sporters, shotguns, and carbines), though it was the design and balance of the full and half stock rifles that made them a preferred presentation piece of Samuel Colt.

Firearms innovation during the American Civil War was at a fever pitch. Guns were going from single-shot muzzle-loaders to multi-shot repeaters. The Colts offered a method by which to load from the front of the cylinder—much handier than the muzzle. You could also load up 5 rather than 1. Though very large to us in the modern day, .56 caliber was much more efficient with lead and powder than .58, .69, or .75 caliber. In short, Colt was again in the position of being one of the leaders in the space of repeating firearms, this time in a shoulder-fired format!

The overall condition is very good. Even finish. The action (hammer/trigger) is strong; the cylinder will advance but not lock up. The bore is in good shape for its age with strong rifling: dark grooves and brighter lands. The stock contains less than average wear and is modestly refinished. Sharp markings. The front sight is a German silver blade in a dovetail. The rear sight is a military style with a main, fixed post with a V notch marked 100, with a short leaf directly behind marked 300, and longer front leaf marked 600. What appears to be “WC” is hand marked on both sides of the buttstock. A great example of a Colt revolving rifle from the period of the Civil War!