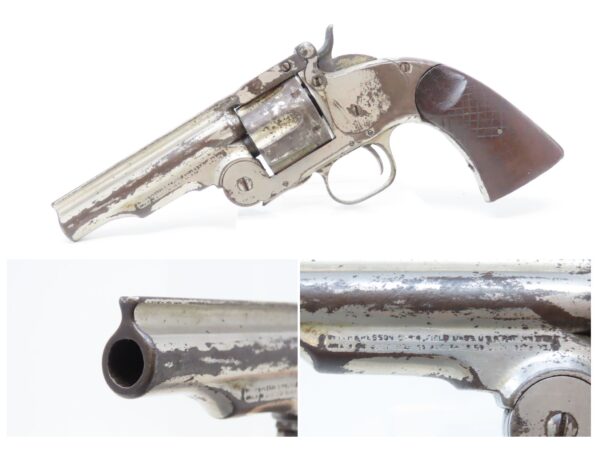 One of only 650 Second Model CIVILIAN Scofield’s

Here we present a rare antique Smith & Wesson Second Model Civilian Schofield Single Action Revolver, manufactured circa 1876-77 in Springfield, Massachusetts with approximately 650 revolvers produced without martial markings with a total of 5,934 Second Model Schofield’s manufactured. This example is a rare civilian variation of the desirable Second Model Schofield. Estimates place the number of civilian guns made at approximately 650, according to Supica and Nahas’ “Standard Catalog of Smith & Wesson”. As a commercial variation, the revolver correctly lacks U.S. sub-inspector marks and the “U.S.” marking as found on martial contracts.

Interestingly many, if not all, civilian Schofield’s that made it out of the factory were those that were rejected by the U.S. Inspectors. Because the public demand for these guns was so great, some researchers have suggested that Smith & Wesson may have intentionally created “defective” guns so they could be available to civilian distributors. Many of these guns had “slight” machining errors on the frame, often just above the grips. Is it possible that the factory worker’s hand may have “slipped”, and he “accidentally” gouged the frame? That’s a question that we’ll never have the answer to.

Original nickel finish/patina. The barrel was cut long ago. Good bore for age and use. The action functions (the cylinder does not lock up properly). Both hand checkered grips contain noticeable handling wear and remain seated firmly. Legible markings. Numbers match. This looks like a gun that somebody rode the river with.