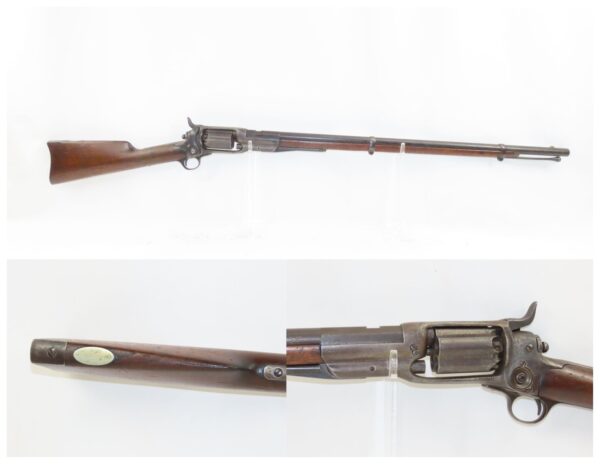 Here we present an antique Colt Model 1855 Revolving Military Pattern Sidehammer Percussion Rifle, manufactured circa 1855 through 1864 in Hartford, Connecticut. Most of us have seen a Colt “Sidehammer” revolver, but few have had the pleasure of seeing one of these revolving carbines. These sidehammers also go by the nickname “Root” thanks to the involvement of Elisha K. Root, who was instrumental to the early success of Colt Manufacturing.

The Colt Revolving Rifle of 1855, named the “Model 1855” was an effort by Colt to attempt to provide the repeating action of a revolver to a carbine. Carbines were a shortened barrel form of their rifle counterparts and were more suitable for use by second line infantry and mounted troops. The Model 1855 brought these qualities together in a handy design under the widely popular “Colt” brand. The Model 1855 was available in three calibers, those being .36, .44, and .56. The .36 and .44 calibers came with a six shot cylinder, while the .56 caliber had a five shot. This carbine held a distinct advantage over the muskets of the day, being able to reel off 6 shot as compared to the single shot muskets.

The Model 1855 was truly the first glimpse of what would become the long guns used in the “Wild West”. The Model 1855 was adopted by the U.S. Army in 1855, but full scale use didn’t take place until 1857 due to issues with “cook off” of the chambered ammo. After firing off a round, hot gas was generated in and around the cylinder that settled in different parts of the chamber. This would result in a “cook off”, where the remaining unfired rounds would ignite. This would result in injury to the support arm of the man firing the carbine or anyone unlucky enough to be near the front section of the gun.

Regardless of the issues of the gun, sources state that between 4,435 and 4,712 rifles were purchased by the U.S. government for use during the American Civil War. The large capacity no doubt added the much needed firepower for Federal forces and proved extremely deadly in the hands of a Union soldier. Known actions involving the Model 1855 included the Battle of Chickamauga in September of 1863. There are even noted versions fitted with scopes used by sharpshooters with deadly accuracy.

The success on the battlefield didn’t directly relate to success in the public market for Colt. The revolving rifle’s safety was reevaluated by the U.S. Army to which the decision was made against keeping the weapon in the Army inventory or adding to existing stocks. So, the rifle was dropped from service and most of the remaining inventory was sold off at a very low price. Thus, the legacy of the Model 1855 revolving rifle ended. Its 4,400+ production total, along with its use in the American Civil War, make this carbine a very rare and sought-after firearm to obtain today.

The overall condition is good+. Strong action with good cylinder index and lockup. The bore is smooth and dim. Solid walnut stock with an average amount of wear. No rear sight is present in the dovetail. Numbers match. There is also a German silver placard on the comb of the stock. It looks as though it used to say something but has been worn or wiped out. This example includes an original sword bayonet that is numbered to a different gun; however, it is a very rare item indeed. The bayonet lug on this piece has been removed at some point in time, long enough ago that while you can still see the lines where it once was, the patina is virtually identical to the rest of the piece. A very neat, very rare, very collectible Colt from the Civil War period!