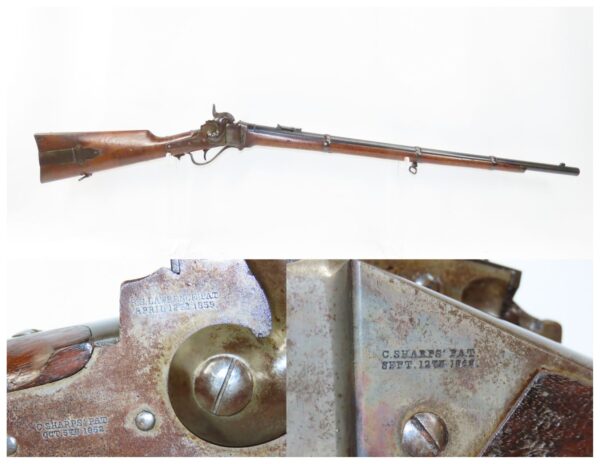 Here we present an antique U.S. Sharps New Model 1863 Rifle, made circa 1863 in Hartford, Connecticut. Christian Sharps (1811-1874) was the originator of a line of sturdy, practical, and popular military and sporting rifles and handguns that were associated with several events that shaped American history in 19th century, including armed conflict in Kansas during the 1850s, the Civil War, the era of the Plains buffalo hunter, and the rise of modern long-range competition shooting during the 1870s. The most famous, single-shot percussion firearm used during the Civil War was the Sharps carbine, a .52 caliber breech-loading firearm invented and patented by Hartford native Christian Sharps.

Over 100,000 Sharps rifles and carbines were purchased and used by the federal government during the American Civil War with only 6,140 New Model Rifles produced as compared to 40,000 New Model Carbines between 1863 and 1865. The serial number range for these rifles falls between C.30,000 and C.40,000. This rifle’s serial number is C.38796. The rifle measures 47” overall with a 30” round barrel. The “New Model” 1863s were made without patch boxes, a wartime procedure to do away with extras. The rifle and carbine were based on the Christian Sharps patents of 1848 and 1852, and on Richard S. Lawrence’s patent of 1859.

These powerful, accurate and reliable rifles certainly saw history from a firsthand perspective during the conflicts leading up to the Civil War, the war itself, and well beyond on the frontier.

The overall condition is good. Original blue and case color finish. Excellent action. Bright bore. The walnut stock shows much use and has a repair to the wrist (stable and unmoving). Sharp markings. Two inspectors cartouches on the left wrist.