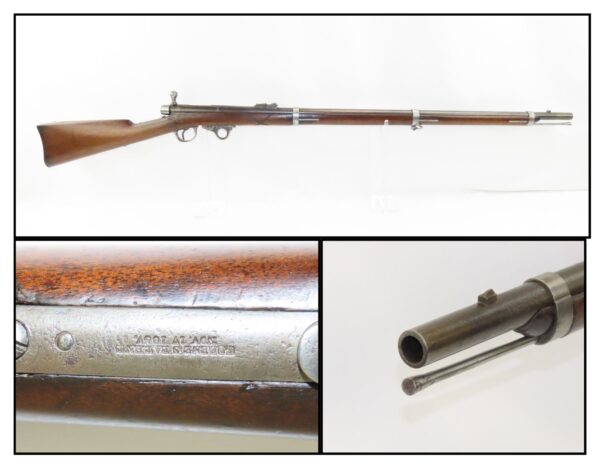 Here we present an antique Greene Bolt Action Underhammer Rifle, manufactured by A.H. Waters in Millbury, Massachusetts circa 1859 through the early 1860s. The Greene breechloading rifle, with its underhammer design and unusual oval shaped bore, was invented by U.S. Army Lt. Col. J. Durrell Greene. Approximately 1,500 Greene Rifles were produced for sale in the United States, and additional 3,000 were made for the Russian Government. Although the Greene was the first American military bolt-action rifle, only 900 were purchased by the U.S. Army. One of the biggest shortcomings of the Greene rifle was, unlike other underhammer arms, these rifles required the percussion cap to be placed on a cone that was located under the barrel.

When the hammer was cocked, there was nothing to hold the cap in place. Consequently, they frequently fell off, often at the most inopportune times. Another shortcoming was the requirement of loading two bullets, one of which served as a gas seal, at the same time. In the initial loading sequence, a bullet was inserted followed by a powder charge, and then a second bullet. The first bullet actually left the muzzle when the rifle was discharged, while the second remained in the breech to prevent propellant gasses from escaping. When the rifle was reloaded, this bullet was advanced into the bore, again followed by a powder charge and new “gas seal” bullet. The process would be continually repeated, thus each bullet saw dual use, first as a breech gas seal and next as the projectile on the next shot.

The overall condition is very good. The action is strong. The bore is semi-bright and in good shape. The stock is smooth and solid. This odd US martial arm is a true rarity with only 1,500 made for sale in the states!