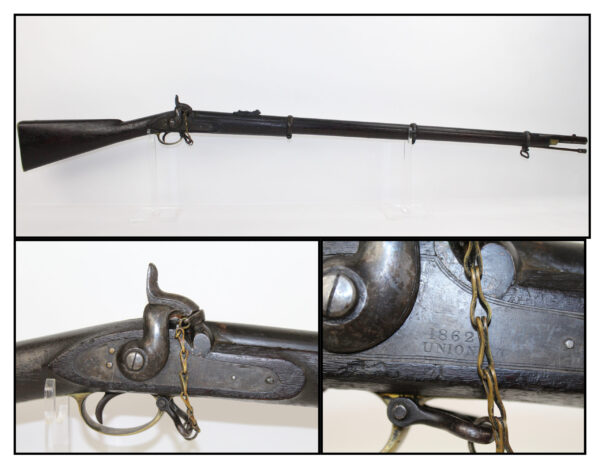 Here we present an antique Enfield Pattern 1853 Rifle-Musket by American Orison Blunt, made in 1862 in New York. Only an estimated 500 were produced as Blunt tried to fulfill a contract for 20,000 Enfield pattern rifles for the American Civil War effort. These rifles constituted a very close copy of the coveted Enfield. Some of the parts may have even been made in England though many were likely made domestically and they were assembled in New York. British Enfields were being sought by both the Union and Confederacy as one of the most reliable arms early in the war, prior to the Union getting their legs under them for manufacturing their own arms.

What makes this most distinctive from the British version is the lock plate, marked with a Federal Eagle at the tail of the lock and the marking “UNION” under the date of “1862”. Instead of British proof marks on the left side of the barrel, there are the initials “CP/B”. The bottom of the stock behind the trigger guard is marked “W.W.”

The overall condition is very good. The metal surfaces are dark with old oil. Walnut stock is also dark, smooth and solid. The markings are clear. The bore is in great condition, semi-bright and sharply rifled. The action is excellent, strong and crisp. Here is a rare Civil War treasure for your collection: an American made Enfield!