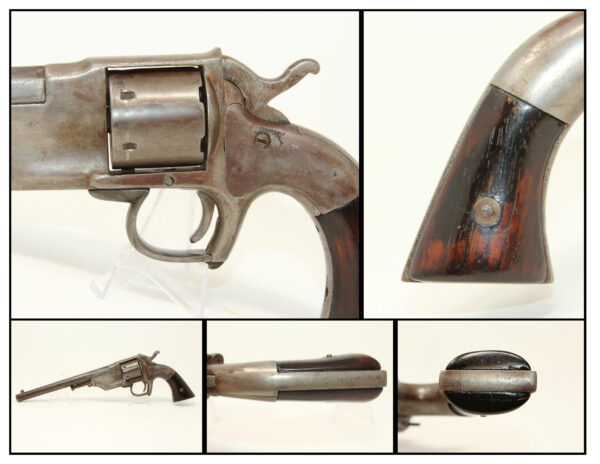 Here we present an antique Allen & Wheelock Center Hammer Navy Lipfire Revolver in .36 Lipfire Cartridge, made circa 1861 in Worcester, Massachusetts, at the start of the American Civil War. Only an estimated 500 of these revolvers were manufactured around the early 1860s before production was halted in 1863 due to infringement of the Rollin White patent owned by Smith & Wesson. These were among the first large caliber metallic cartridge handguns manufactured in the U.S. and were the only large caliber metallic cartridge handguns available during the Civil War aside from pinfire revolvers. Surviving examples are rare. This single action revolver has a six-shot cylinder, solid frame and unique rack and pinion loading lever in which the forward portion of the trigger guard serves as the operating lever.

The overall condition is good. The iron parts have a gray patina throughout. No markings remain. The grips are a little shy but still in good shape. The bore is in good condition. The action remains strong