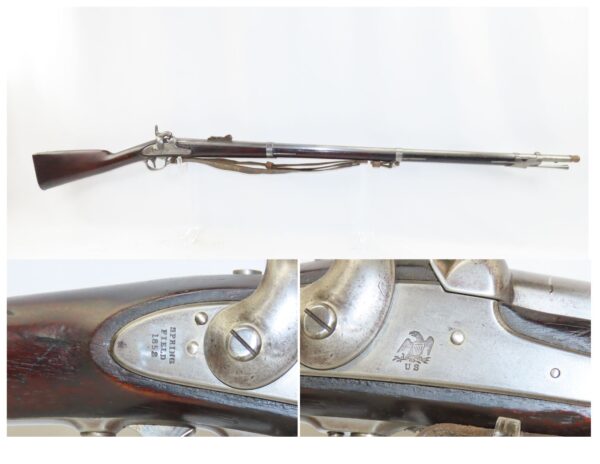 Here we present an antique Springfield Armory U.S. Model 1851 Cadet Rifle-Musket, manufactured in 1853 in Springfield, Massachusetts. This is a rare variant associated with West Point Military Academy. Only 341 rifles were produced out of a total of 4,000 muskets altogether. The remainder were, of course, smooth bored. with a total as mentioned of around 4000 being produced. The smoothbores were made in .57 caliber with a 40-inch round barrel. By the late 1850s (circa 1856) 341 of these were taken out of arsenal stock, their bores rifled, a longer range and adjustable rear sight added, and sent to West Point—the most developed and well-recognized of all the academies, founded in 1802 by President Thomas Jefferson. The addition of rifling and sights were designed to match the newer technology of the rifle-muskets that were being issued at the time. Since this cadet rifle was brought in in about 1856, it might have been shot by many of the officers who would become famous during the horrific war to come, the American Civil War. For instance, young George Armstrong Custer would graduate in the class of 1861.

This rifle features metal surfaces that were finished bright. The lock has the winged eagle over US forward of the hammer and “SPRINGFIELD 1853” behind the hammer. Included is a socket bayonet and a leather sling. This piece is featured on page 247 of American Military Shoulder Arms, Vol. 3 by George Moller.

The overall condition is near fine. Strong action. The bore is bright and nicely rifled. Solid stock. “1853” dated lock. Both the included bayonet and sling are in good shape. “71”, a rack number, is stamped on the underside of the stock just in front of the trigger guard.