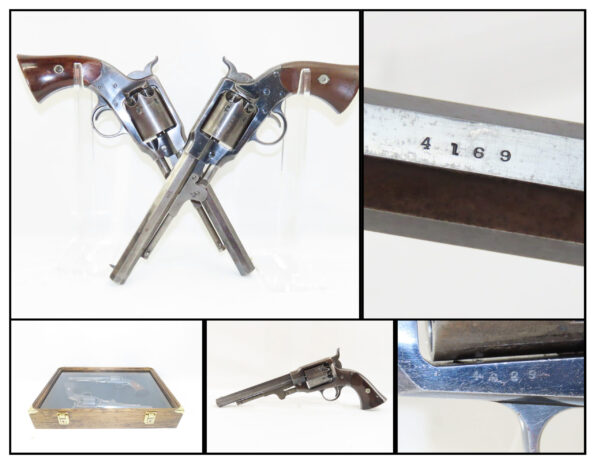 Here we present a pair of antique Rogers & Spencer US Contract Army Revolvers in .44 Caliber, made circa 1865 near Utica, New York in Willow Dale. These revolvers were based on the Freeman design and featured a solid frame like the Whitneys and the Remingtons. This was a high quality firearm that would have excelled on the battlefield. Its capacity was 6 shots of .44 caliber cap & ball out of a 7-1/2 octagonal barrel.

These are two of the 5,000 contract revolvers made for the U.S. Army in 1865. They were made for the Union war effort but missed the conflict. They were put into storage before eventually being sold by the Army to a distributor, and another 800 revolvers were made for civilian use. Prior to making these revolvers, Rogers & Spencer had made Pettengill double action revolvers.

Both of these revolvers bear multiple single letter government inspector marks throughout and a clear cartouche of “R.P.B.” on both left grips for Sub-Ordnance Inspector Captain R.P. Barry of the US Army. He oversaw inspecting Remington, Starr, and Rogers & Spencer revolvers between 1860 and 1865. These are exactly 460 numbers apart.

The overall condition is fine. Original blue finish and case colors. The actions are strong. The bores are bright and shiny. One revolver has 7 uniform notches along the back strap. A very nice pair of revolvers from 1865!