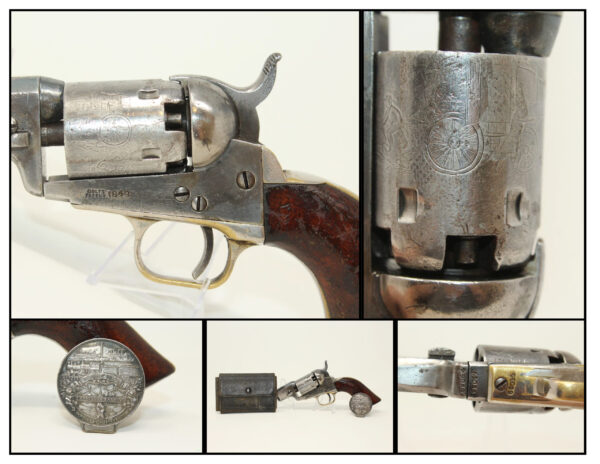 Here we present an antique “Wells Fargo” Variant of the Colt 1849 Pocket Revolver, made in 1853 in Hartford, Connecticut, with a Rare Wells Fargo Semicentennial Silver Coin to Commemorate 50 Years (1852-1902). Only about 4,000 of these revolvers are estimated to have been made. Unlike the main line of Colt’s 1849 Pocket revolver, this one does not have a loading lever and it features a shorter 3-inch octagonal barrel. This rare coin accompanies the revolver and they make a fantastic set for those interested in Wells Fargo, guns, coins, history, or all of the above!

The coin itself is struck on each side with various action scenes to include an ocean liner and a factory in the background, telegraph wires in the midground, and a locomotive passing by in the foreground. A banner runs through the middle with “1852 MARCH 18th 1902” over “EXPRESS AND BANKING” over FIDELITY”. Various symbolgy such as crossed quill pens, crossed keys, and a fist full of lightning make up the balance. On the obverse, at the top, is a stagecoach with a driver and a guard shooting at a man with a raised rifle in a tree line. Below is a rampant horse with a rider looking down the barrel of his rifle at a Native with his bow poised to let fly an arrow. These 118 year old coins were given to current employees of the company who were at least a year with the company when the semicentennial occurred. Included is a smaller black leather pouch with velvet lining. This coin has been affixed with a thin bar so as to be able to attach a ribbon, possibly for wearing this coin as a medal. These are rare and valuable with one recently fetching over $2000!

This one features a clear cylinder scene. “COLTS PATENT” is stamped on the left side next to “1849”. This one has the two-line New York barrel address.

The overall condition is near fine. About 20% of an old nickel finish remains. The markings are clear. The cylinder scene is fantastic. The serial numbers match on the grip frame, trigger guard, frame, and barrel. They differ on the cylinder and barrel wedge. The walnut grips are in very good condition, showing honest wear. The bore is in good condition with sharp rifling. The action is excellent, strong and crisp. Here is a set the likes of which you won’t find again!