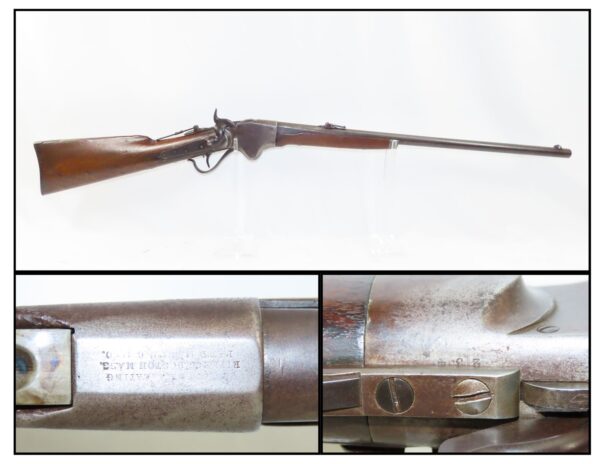 Here we present a rare antique Spencer “Sporting” Rifle in 56-46 Centerfire, manufactured by the Spencer Repeating Rifle Co. in Boston, Massachusetts. This rifle was one of only 1,800 manufactured between 1864 and 1868.

The Spencer was the world’s first military metallic cartridge repeating rifle, and over 200,000 examples were manufactured in the United States by the Spencer Repeating Rifle Co. and Burnside Rifle Company. The Spencer repeating rifle was adopted by the Union Army, especially by the cavalry, during the American Civil War but did not replace the standard issue muzzle-loading rifled muskets in use at the time. Among the early users was George Armstrong Custer. The Spencer carbine was a shorter and lighter version designed for the cavalry.

The Spencer Repeating Rifle Company was in existence for a relatively short period of time, from its inception in January 1862 until completion in December 1868. During these six short years the company focused on production of military contract rifles and carbines, eventually providing 13,474 rifles and 64,692 carbines to the government during the Civil War and subsequent Indian Campaigns.

At the end of the Civil War in 1865, full factory production of sporting rifles began using newly forged receivers. These “late model” Sporting Rifles, as is this one, have a unique set of serial numbers off-set next to the rear tang as their distinguishing feature. This example, with its low (324) serial number, was built early in the “late model” rifles. The demise of the company and the end of the Sporting Rifle factory production was mainly due to demand. The breechblock would not accept longer, more powerful cartridges that were being utilized on the frontier which resulted in decreasing sales.

This rifle features a ladder rear sight mounted in the barrel as well as an interesting fabricated receiver-mounted peep sight. The trigger is single set for a very light, crisp trigger pull for precision shooting.

The overall condition is very good. Excellent action. Bright bore with sharp rifling. This rifle was used: the stock is solid but does contain some chipping on the left fore end and butt plate tang. Even, brown patina throughout. Low serial number partially covered by the tang-mounted sight assembly. This is a very rare Spencer rifle!