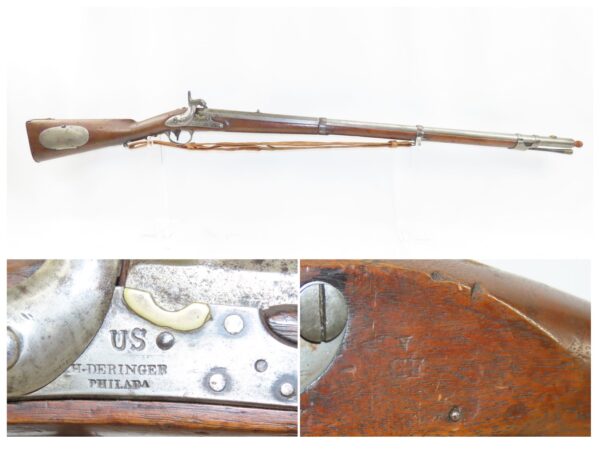 US Marked 1 of 2,000 Contracted by Henry Deringer

Here we present a very scarce and early production antique U.S. Model 1814 Percussion Conversion Rifle from the Henry Deringer Contract, made during the production run between 1814 and 1817 in Philadelphia, Pennsylvania. This example would have started life out as a flintlock and converted likely sometime around the late 1850s, just prior to the American Civil War.

The U.S. Contract Model 1814 Rifle was produced in very limited quantities by Henry Deringer of Philadelphia, Pennsylvania and Robert Johnson of Middletown, Connecticut. Each of these two makers was awarded a contract for 2,000 rifles. The rifles were intended to arm additional regiments of riflemen that were raised during the War of 1812, however it is estimated that less than 100 of these rifles were even delivered prior to the signing of the Treaty of Ghent on December 24, 1814. The rifle was designed by Marine T Wickham, who was at the time a U.S. arms inspector working at the Schuylkill Arsenal, which was also known as the Philadelphia Depot, and had formerly been the chief armorer at Harper’s Ferry. Wickham subsequently left the Ordnance Department to go into arms production himself, and it was George Flegel, who Wickham had trained, that eventually inspected the rifles that Wickham had designed, and Deringer subsequently manufactured and delivered.

The M-1814 Rifle was superseded by the U.S. Model 1817 Common Rifle. The term “Common Rifle” came into use after the adoption of the Model 1819 Hall’s Patent Breechloading Rifle and was used during the period to differentiate between the muzzle loading “common rifle” and the new breechloader. The Model 1814 incorporated some very new features for a U.S. rifle that had not previously been seen on American made military rifles. These included the use of barrel bands to retain the barrel, the use of sling swivels, and the use of a detachable brass flash pan. These were all key features in Wickham’s new design.

The overall condition is very good. Excellent action. The bore is in good shape for its age with strong rifling. Solid stock with an expected amount of wear (minor dents and dings). “US” marked lock and left barrel flat. Good leather sling.