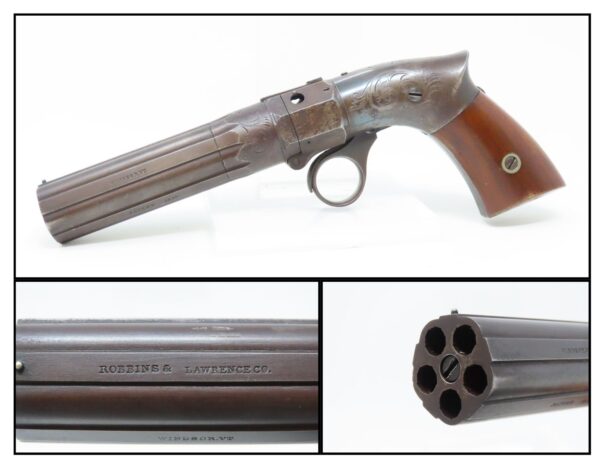 Here we present a rare antique Robbins & Lawrence Pepperbox Pistol, made circa 1851 in Windsor, Vermont. Only about 7,000 of these were ever produced, and in a good number of variations. What made Samuel Robbins’s and Richard Lawrence’s design unique during the hay-day of the pepperbox was the fact that the barrel cluster did not revolve, but the internal hammer did. The percussion caps were also more protected than other percussion revolvers in general due to the tip down barrel design, which allowed the shooter to replace the percussion caps on the nipples, which are directly in line with the bores. The R&L also featured a ring trigger that cocked and rotated the hammer to the next position, with a second trigger that wrapped around the ring, which dropped the hammer. This was a very interesting and unique design!

As successful as their pepperboxes were, Robbins & Lawrence made firearms history in other ways. According to the NRA Museum:

Richard S. Lawrence and Tyler Henry, a gunsmith and foreman at Robbins & Lawrence, worked together on the Jennings Repeating Rifle, a project that combined their talents with those of Horace Smith and Daniel Wesson, later to become famous both for their revolver designs and for the Volcanic lever-action pistol and carbine. Lawrence invented a lubricated bullet which improved the function of breech-loading repeaters, and Henry would build on his experience with both the Jennings rifle and Volcanic arms to develop the Henry lever-action repeating rifle, a forerunner to the famous Winchester Model 66 rifle and carbine. Lawrence also developed the “Lawrence Pellet Primer System,” which was successfully used with Christian Sharps’ breech-loading carbines and rifles of the Civil War period. Lawrence would later become Master Armorer for the Sharps Rifle Manufacturing Company at that company’s Hartford factory.

During the 1851 Crystal Palace Exposition in London, Robbins & Lawrence demonstrated their system of interchangeability to participants and spectators, earning an award for their efforts. The British government armory at Enfield purchased machinery from Robbins & Lawrence, making them the first U.S. firm to export the new technology in a significant way. The Windsor company also received a contract to produce 25,000 rifles for the British military in their Connecticut arms factory. Robbins & Lawrence defaulted on the terms of the contract, and were forced into bankruptcy. The firm and its assets became the property of the British Crown, and these facilities were leased back to Samuel Robbins and others for the purpose of completing the outstanding order.

In short, Robbins & Lawrence made a huge impact on firearms history, from interchangeable parts, to manufacturing systems, to the invention of some of the most iconic guns of the 19th Century, namely Sharps, Smith & Wesson, Jennings, Henry and Winchester.

The overall condition is very. Original blue finish turned to a plum patina. The action is strong. Nice bores for age. Good grips with minimal wear. Sharp engravings on the frame and breech. Numbers match. Here is a truly unique pistol for the collection!