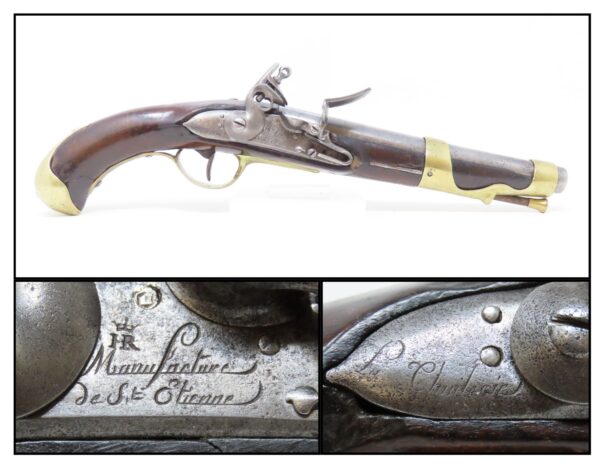 Here we present an antique Revolutionary War Era French Military Model 1763/66 flintlock pistol, made by La Thuilerie in St. Etienne in 1775. The Model 1763 pistols were used by both the French Army and Navy and by American rebel forces later during the American Revolution making them historically significant pistol for both European and American martial arms collectors. Large quantities of French firearms were imported for use by the American revolutionaries in their struggle against the British crown.

There are three French armory proofs followed by a “75” date on the left side of the barrel at the breech. The tang is also dated 1775. Interestingly, the markings on the barrel, top and bottom, have all been lightly peened so as to obfuscate them. This kind of treatment of markings on firearms tends to happen when arms are surrendered or captured. The exterior of the lock is marked “La Thuilerie”, the maker, and “Manufacture de St. Etienne”. Apparently, the maker did not have the king’s (Louis XVI) permission to mark his products with Manufacture Royale and thus put his own mark on the piece. There are still inspector’s initials on the lock, those of Hubert Rozier. The interior of the lock is also marked with a name; possibly “J VANDE”.

The overall condition is very good. The action is strong. Good, smooth bore with a patina. The walnut stock has certainly seen some wear and has been repaired just above the pommel and has a stable (immobile) crack on the side of the trigger guard, under the lock. There are old chips throughout that have been worn smooth from use and age. Despite this, the stock is solid and sturdy. The ramrod is a replacement. Here is a great specimen of a French military cavalry sidearm from 1775!