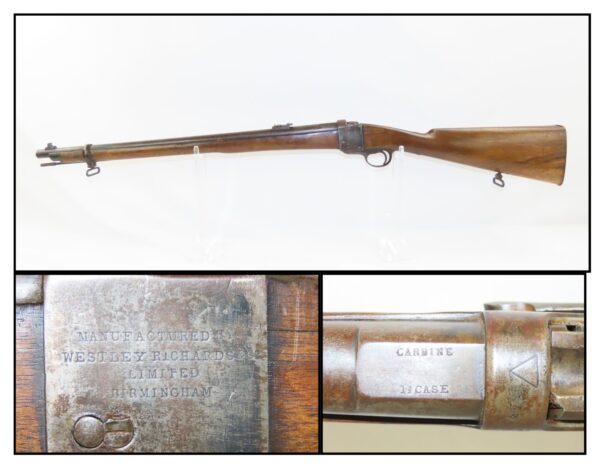 Here we present an antique Westley Richards Deeley & Edge Patent Military Type Carbine, made in Birmingham, England, circa 1880. William Westley Richards established his prestigious company in 1812, at 22 years of age, at 82 High Street in Birmingham. His high-end London shop was established in 1815 at 170 New Bond Street. William’s son, Westley Richards, joined his father in business at the age of 26 and continued to grow the business with his own ideas and patents. It was he who was responsible for the design of the Monkey Tail Carbine in 1858.

This carbine is very similar in stature and aesthetic to the Monkey Tail of the 1860s, though of course lacking the “monkey tail” namesake breech block. This is the new and improved falling-block action which opens by depressing the loading lever on the right side of the action. This one is chambered for the .450 #1 Carbine cartridge and the breech is marked “CARBINE 1 ½ CASE” to distinguish the shorter, somewhat lighter carbine cartridge from the larger rifle cartridge. While there are rifles and even carbines that were made with big-game hunting in mind (some very classy and made for Africa), this carbine was made for the military, specifically the cavalry. The original black powder cartridge sent a 380-grain paper patched bullet at about 1300 fps and there are those who still load their own. These were not produced in large quantities and are rare, especially in the United States.

“DEELEY & EDGE/PATENT” markings are on the right side of the receiver. John Deeley was the managing director of Westley Richards & Co. from 1872-1899 but had worked for the firm since 1860. He ran the business side but was also a self-trained designer who took out this patent with James S. Edge, Westley Richards’ foreman. “MANUFACTURED BY/WESTLEY RICHARDS/LIMITED/BIRMINGHAM” is stamped on the left side of the receiver. The Westley Richards triangle marking is over the chamber. The top of the barrel is marked “WHITWORTH PATENT” as this carbine is rifled with Whitworth’s polygonal rifling. Commercial Birmingham proofs are located on the left side of the barrel, along with the serial number “212”.

The overall condition is very good. The action is excellent. The bore remains bright with great Whitworth rifling. The stock is smooth and solid. It is clear that it was used. There are hairline cracks where the butt stock and forearm meet the receiver: on the underside of the forearm, on each side, as well as the top of the wrist on the left side behind the receiver. Here is a rare example of the Westley Richards Deeley & Edge Patent Carbine!