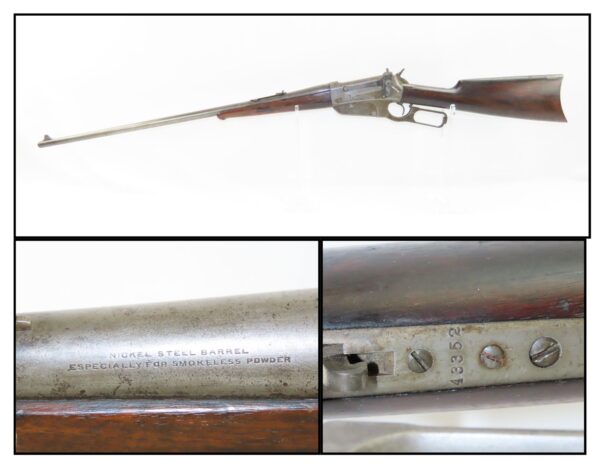 Here we present a Winchester Model 1895 lever action repeating rifle manufactured in 1904 in New Haven, Connecticut, and chambered in .30 US, also known as the .30-40 Krag.

There were 425,881 Model 1895s produced. At around serial number 5000, a new receiver profile was introduced which had fluted sides, as opposed to the original flat sided design. This new receiver reduced the weight of the rifle by a small amount and increased the width by 1/16 of an inch.

The Model 1895 rifle in .30 US is most commonly associated today with former President Theodore Roosevelt and the Battle of San Juan Hill in Cuba during the Spanish-American War. However, it was also used by many famed hunters and adventurers, to include Martin and Osa Johnson, Charles Cottar, and author Stewart Edward White. Gerrit Forbes, first cousin of Franklin D. Roosevelt, recommended the M1895 to Theodore Roosevelt who took two M1895 chambered in .405 rifles with him on his 1909 safari to East Africa. The Texas and Arizona Rangers were also known to have preferred the Model 1895, in this caliber too.

The overall condition is very good. The action is strong. The bore is in good shape. This example features a Lyman rear peep sight. This 1895 Winchester has a bit of everything going for it: an innovative design by none other than John Moses Browning, a history of usage by many of the top hunters of the early-20th Century, an early issue, and chambered in a neat old cartridge that is still available today!