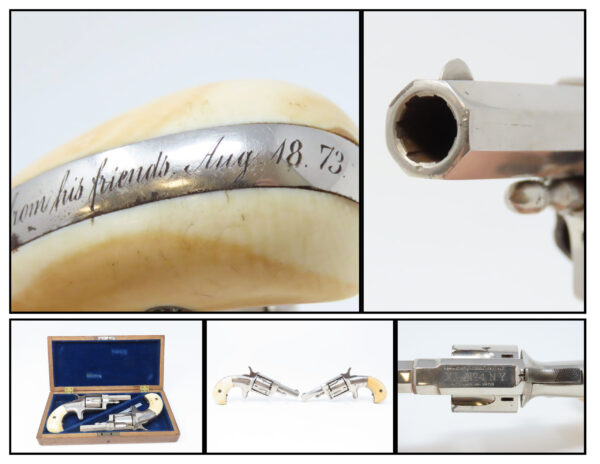 Here we present a Cased Pair of Presentation Inscribed Hopkins & Allen XL No. 4 Revolvers, made in Norwich, Connecticut circa 1873. Each of these revolvers is identical and identically engraved “Alfred Malpas from his friends. Aug. 18. 73” trailing down the backstrap. These revolvers are finished in nickel with ivory grips and case colored hammers. The case is of walnut with a royal blue velvet lining and just space enough for each revolver situated reverse of the other.

Alfred Malpas was born in New York City 16 November 1840 to English parents, Charles T. & Elizabeth. He apprenticed as a printer, c1854-1857, before he went to work for his first railroad, the New York & Harlem Railroads, as a telegraph operator, c1857. He went to work for the Erie Railroad as an operator, dispatcher, and agent c1859, and worked in Otisville, NY, Jersey City & Paterson, NJ, until the American Civil War broke out.

Living in New Jersey at the time, he naturally enlisted as a private in I Company of the 2nd New Jersey Volunteer Infantry, 30 May 1861. He and his unit were there at the first major battle of the war, the First Battle of Bull Run (aka Battle of Manassas) 21 July 1861, where the Union suffered defeat. They were also at the Siege of Yorktown (5 April-4 May 1862). Malpas, likely given his prior experience on the railroad, became General Philip Kearney’s aide-de-camp. Kearney was a fellow New Yorker who was a veteran of the 1st US Dragoons and the Mexican War. He had moved to New Jersey in 1855. He also fought for Napoleon III as late as 1859. At some point, Alfred was promoted to sergeant before he was discharged from the 2nd New Jersey and into G Company of the New York 40th Infantry as a 2nd Lieutenant 8 July 1862. He was promoted to 1st Lieutenant 12 August 1862 and soon after wounded at the Second Battle of Bull Run, 29 August 1862. He would be discharged for disability caused by his wounds 3 February 1863.

He resumed work for the Erie Railroad (c1863), then moved to the Atlantic & Great Western (c1865), before taking off for a year’s travel through China & Japan—apparently because of health issues, possibly to do with his wounds. When he returned stateside he settled in San Francisco, California and worked for the Central Pacific Railroad, first in their telegraph office, then as agent of the Oakland Ferry in San Francisco Bay, which was CPR owned. It was in 1873 that he married Mary Louis with whom he had 4 children (it is for his marriage that we suspect his friends gifted him this set; as for his friends, he was a busy man and part of many fraternal organizations in addition to the Grand Army of the Republic). His final post with the CPR appears to be an office inside the Grand Hotel at the corner of Montgomery Street and Market Street.

He retired from the Central Pacific Railroad in September of 1884 to life on a fruit ranch in Saratoga, California, which he had bought in 1880. He is listed as the manager of the Los Gatos and Saratoga Wine Co. at 3 Golden Gate Av in the San Francisco City Directory from 1890. This was a fruit/grape grower owned co-op and he appears to have been a partner in this as well. The property consisted of 40 acres of fruit trees (prunes, apples, pears, cherries, peaches, apricots, almond, walnut, plums, oranges, and lemons), 60 acres of grape vines, and 87 acres of timber, in addition to its own processing facility for wine and brandy. There was a large cellar built into the hillside above San Tomas Aquito Creek and their production increased enormously from 8,000 gallons in 1885 (their first vintage) to 80,000 gallons in 1886. They specialized in Sauternes and sold mostly to San Francisco firm C. Schilling & Company. The house on the property had 14 rooms with two bathrooms with indoor plumbing and hot and cold running water and appears to have been used as a hotel. The house also had gas throughout! This was quite the place! Alfred passed away in 1906 at age 65, relatively young but certainly well-accomplished. The Los Gatos & Saratoga Wine & Fruit Co. would close and be dismantled in 1919 due to Prohibition.

The overall condition is very fine. Brilliant original nickel finish with vivid case colors on the hammer. Excellent ivory grips. The action is strong all around on both revolvers. The bores are in fantastic shape. The inscriptions remain clear as well as the other markings. The case is fine. A wonderful set made in tribute to a Civil War veteran and an active man!