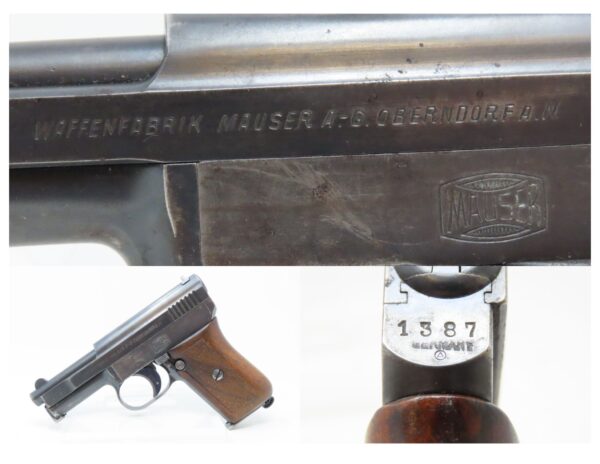 Here we present a C&R German Mauser Model 1910 Pistol, made circa the 1910s in Oberndorf, Germany. The Model 1910 was an early semi-automatic pistol for Mauser and one that was quite successful. The Model 1910s were in service between 1910 and through the end of World War II in 1945.

Paul Mauser’s vision for his new semi-automatic pistol was to create a design that could be essentially scaled up or down to suit the cartridge it was to be used for. These designs were most probably created by an engineer named Josef Nickl whom Mauser had employed in 1904. Nickl produced designs for pistols in 9mm Parabellum, .45 ACP, 7.65 Automatic (.32ACP) and 6.35mm (.25ACP). The development of Paul Mauser’s small pistols was well underway by around 1908, around this time he told the Deutsche Versuchs-Anstalt für Handfeuerwaffen (the German Experimental Laboratory for Handguns) that his company would be producing a small 7.65mm pistol “That would not be larger in weight and size than the well-known Browning 7.65 pistol”. The pistol we now refer to as the Mauser “Model 1914” was the 7.65mm (.32ACP) version and development work on it began after the “Model 1910” was in production. The design of the pistol was almost identical to that of the 6.35mm “Model 1910” but scaled for the larger and more powerful .32ACP cartridge.

Despite the fact that Mauser’s company did not actually refer to their designs by model, but rather by caliber, so the two smaller Mauser pistols that were produced in large quantities have tended to be referred to by collectors by model year. The Model 1910 is the nomenclature applied to the smallest of these handguns that was chambered for the 6.35mm cartridge (.25ACP) and the Model 1914 model name for the 7.65mm (.32ACP) pistol.

The overall condition is good. Original finish. Excellent action. Bright bore. Numbers match. The markings are sharp. “269-03-0001” is hand carved into the left side of the barrel. Good grip with an expected amount of handling wear.