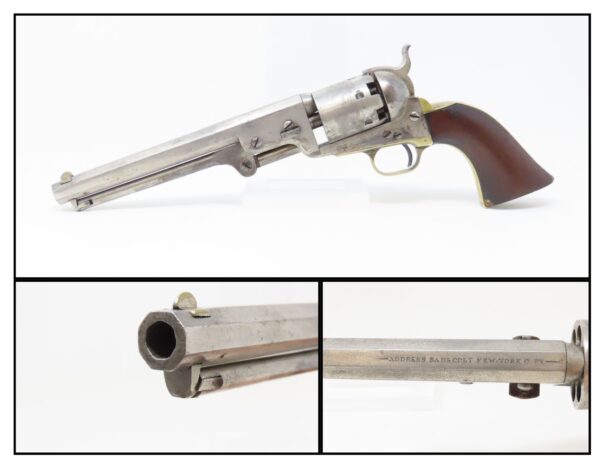 With a Rare Tin Finish!

Here we present an antique Colt U.S. Model 1851 Navy Percussion Revolver, made in 1857 in Hartford, Connecticut. The 1851 Navy was one of Colt’s most famous and successful lines, reaching a production total of 257,348 from 1850 to 1873 (right up to the time of SAA production) from both Hartford and London factories. From Hartford alone, 185,000 were made by the end of the American Civil War. Many of these saw service during the conflict on both sides. There were some military purchases and lots of private purchases by soldiers going off to war. In addition, the Model 1851 was carried by Confederate General Robert E. Lee and was a favorite of “Doc” Holliday and “Wild Bill” Hickok, who carried two of these most famously in his red sash.

Truly, the Colt 1851 Navy revolver ushered in the era of the gunfighter. Among the many guns that were used on the western frontier, none was more popular in its day than the Colt percussion revolver designated the 1851 Navy. This single action revolver weighed in at roughly 42 ounces. Prior to the Navy’s introduction, hand gunners had to make do with the Colt Walker and Dragoon revolvers, both of which weighed over four pounds. These big guns were best suited for carry in pommel holsters on the saddle. The Colt Navy was the first popular single-action revolver that could be worn comfortably on the belt.

This one has single letter inspection markings throughout. The brass grip frame has been drilled out on the back strap and butt, possibly for a simple detachable shoulder stock. The gun’s finish is tinned, which was a similarly durable but less expensive option (than nickel for instance) for especially corrosive environs such as around sea water.

The overall condition is very good. Very nice period tinned finish. The action is excellent with great lockup. The bore remains in good shape with nice, sharp rifling. The grip is in good shape with a small chip on the left toe. The Battle of Campeche cylinder scene is still quite visible. Numbers match. A great Antebellum Colt 1851 Navy with unique & interesting features!