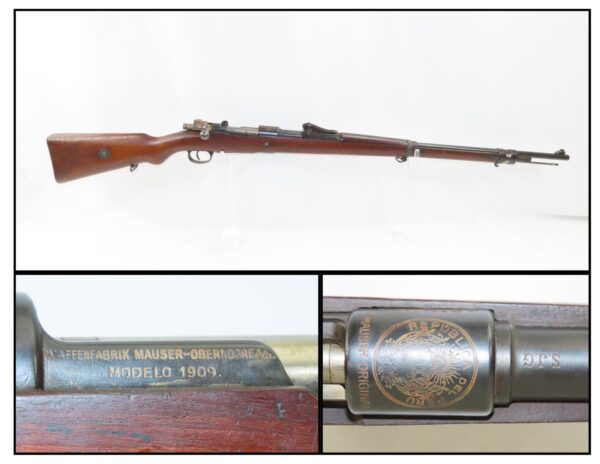 GERMAN MADE Military Rifle Copied After the GEWEHR 98

Here we present a C&R Peruvian Contract Model 1909 Mauser Rifle manufactured at Waffenfabrik Mauser, circa the 1912 in Oberndorf, Germany. Between the years of 1910 and 1914, Peru received thousands of Mauser Model 1909 rifles chambered in 7.65x53mm Mauser. They were close copies of the German Gewehr 98, including the Lange Visier sight.

Aside from the caliber, the only differences were the larger receiver ring, the shorter breech, the slightly modified strip guide to use older Model 1891 strips, the longer hammer, the aspheric shape of the bolt handle and the Peruvian markings. While these rifles were able to fire the old bullets with round nose, they were later adapted to spitzer bullets. These weapons were used during the Leticia Incident and the Ecuadorian–Peruvian War. After 1945, the Mauser 1909s were replaced by American weapons and were sold in the civilian market in the 1960s, a few being kept as ceremonial rifles.