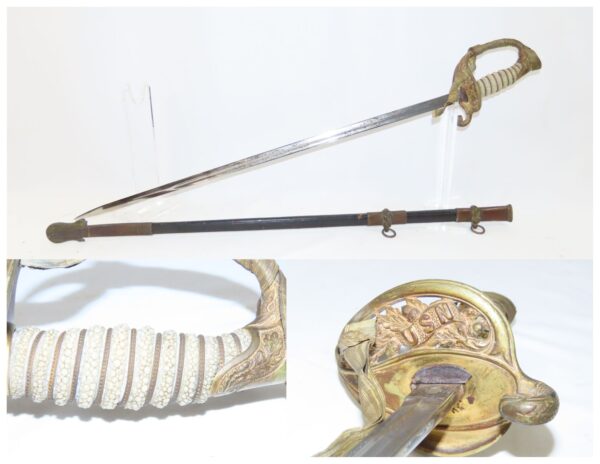 Personalized to F. B. UPHAM, US Navy Admiral

Here we present an antique Model 1852 U.S. Navy Officer’s Sword, made by Horstmann of Philadelphia, Personalized to F.B. Upham. This sword was owned by Frank Brooks Upham, who retired from the US Navy at the rank of Rear Admiral. Upham was born in 1872 in Fort Apache, Arizona Territory. He was appointed to the Naval Academy in 1889 and graduated in 1893. After two years of duty with the Pacific Squadron he was commissioned Ensign in 1895.

At the beginning of the Spanish-American War, he was on the staff of Commodore George Dewey, at that time the Commander in Chief of the Asiatic Squadron, on the protected cruiser Olympia, the flagship of the Asiatic Squadron. In getting to war footing, then-Assistant Secretary of the Navy, Theodore Roosevelt, ordered Commodore Dewey to: “Order the squadron to Hong Kong. Keep full on coal. In the event of declaration of war Spain, your duty will be to see that the Spanish squadron does not leave the Asiatic coast, and then offensive operations in Philippine Islands.” This culminated in the Battle of Manila Bay, the first battle of the war, whereupon Dewey and his squadron—with the Olympia leading the way—handily destroyed the Spanish squadron in a night attack and took the harbor at Manila, Philippines. There were only a few wounded on the American side and one fatality from a heart attack.

In the years following, He served tours on the battleships Oregon, New Jersey, and South Dakota. He then commanded his old friend the Olympia before the steam yacht Scorpion. Shore duty followed at Newport, RI, the Naval War College, then the Bureau of Ordnance in Washington. In 1911 he was the Assistant Naval Attaché for Tokyo and Peking. He arrived just prior to the outbreak of the Chinese Revolution of 1911.

During the United States’ next major conflict, World War I, Upham commanded the Columbia (a protected cruiser) and the Pueblo (armored cruiser), conducting armed escorts for convoys moving troops and supplies for the American Expeditionary Force in France across the Atlantic to and from both England and France, for which he was awarded the Navy Cross, the US Navy’s second-highest decoration.

Following the Great War, he served as Chief of Staff to Rear Admiral Hilary P. Jones, Commander of the Battleship Force of the Atlantic Fleet, then as naval attaché in Paris, France, then in Washington D.C. in the Office of Naval Intelligence. During this time, he had at least one essay published entitled “Leadership of Men” from 1921. He went on to Command the battleship Tennessee from 1924-1926 before becoming the commandant of the Naval Air Station at Pensacola, Florida.

Upham made Rear Admiral in 1927. Upham then commanded Battleship Division 3 and Submarine Divisions, Control Force, and served as Chief of the Bureau of Navigation. In August 1933 he was made Commander in Chief of the Asiatic Fleet and “broke his flag” on the heavy cruiser Augusta with then-Captain Chester W. Nimitz at the helm. Upham returned to the US to finish out his career as Chairman of the General Board from December 1935 until September 1936 before retiring October 1936.

The overall condition is near fine. The blade is bright and etched with traditional USN and patriotic symbols. “F.B. Upham” is clear on the name plate. Solid hilt and the twisted wire and shark skin wrap remain tight. The scabbard is in very good shape with nice leather. Initial monogram at the throat a bit worn from the sword being worn. Dent at the drag.