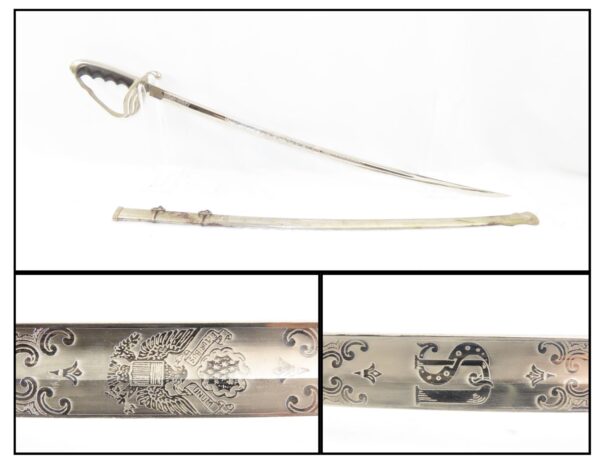 Here we present a U.S. 1902 Pattern Army Officer’s Sword, made circa the mid-1900s. The Model 1902 Army Officers’ Saber is the current sword used by officers of the United States Army. The official nomenclature for the current regulation U.S. Army saber is “saber for all officers, Model 1902”. It was adopted on July 17, 1902, by authority of General Order No. 81. The M1902 saber was authorized for all officers, both infantry and cavalry, with the exception of Chaplains. The lightly curved blade normally measures between 30 and 34 inches long with weights initially specified by the U.S. Army to be between 20.2 and 22.8 ounces.

The M1902’s modern role is completely ceremonial, and it is virtually never carried except in parades and ceremonies, by commissioned officers in command of troops in formation. It is also used by United States Air Force officers for their parades and ceremonies. As a presentation saber, the M1902 is also sometimes given to newly commissioned officers of distinction or as retirement or change of command gifts.

The overall condition is very fine. Bright etched blade. The guard is bent inwards slightly toward the pommel. The hilt firmly seated. The scabbard is good.