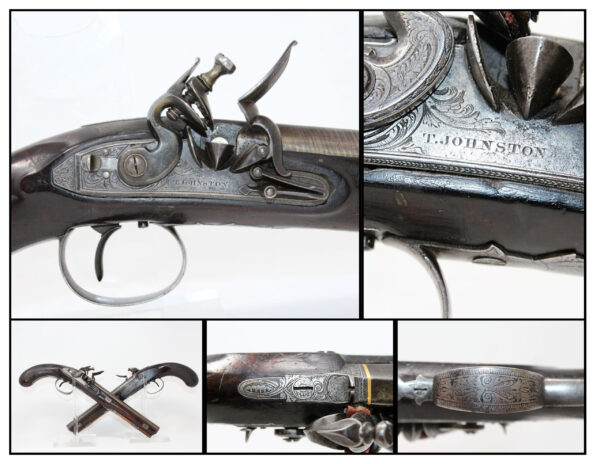 By Johnston of Dumfries, Scotland

Here we present an antique Matched Pair of Flintlock Pistols by Johnston of Dumfries, Scotland. Each bears the crest of Clan Young on the thumb plate set in the wrist of each stock. The crest features the motto “Robore Prudentia Praestat” which means “Prudence Excels Strength”. Under the motto is a rampant demi-lion wielding a sword with a torse under that. Clan Young has hundreds of years of history with records going to at least as far back as the 13th Century. The family originated from the border marches region of Scotland and England where violent raiding was a normal part of life and it is recorded that members of the family took part in these raids as “Border Reivers” from the 13th through 17th Centuries. Notable family members include Peter Young, who was the tutor and mentor of King James VI and also an ambassador during the 16th Century. Many went on to serve in official royal and governmental positions and still do to this day.

These pistols are a matched pair that would have been used as offensive and defensive weapons as well as dueling pistols during a time when one defended his honor even violently. Each has a barrel with a Damascene twist with a breech banded in gold and engraved. The top flat of each barrel is marked “Johnston Dumfries”. Dumfries lies within the border marches area spoken of already. Lock and trigger guard are also finely engraved. The lock is maker marked “T. JOHNSTON”. Touch holes are lined with platinum. These pistols were made circa the late 18th Century and while ornate, were certainly made to use.

The overall condition of this set is fine. The Damascene pattern is clear. The maker’s markings are clear. The stocks are in great shape with the handling marks you would expect from 200+ year old weapons. The bores are smooth and clean. The actions are crisp. Here is an excellent opportunity to own a piece of Scottish and United Kingdom history, especially if you are descended from Clan Young.