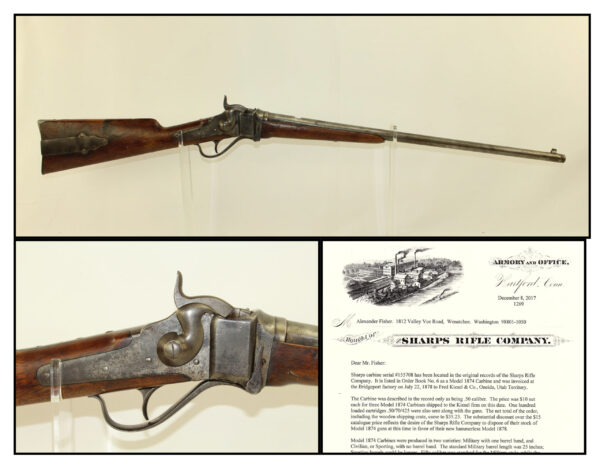 Here we present an antique Sharps Model 1874 “Carbine” in .50-70, made circa 1875 in Bridgeport, Connecticut, and Shipped to Fred Kiesel in Oneida, Utah Territory in 1878. Fred Kiesel was born in Wurtemburg in 1841. His father had plans for his son to become a Lutheran minister but instead Fred boarded a ship bound for New York in the United States at the age of 16. He was living in Memphis, Tennessee when the American Civil War erupted and he fought in H Company of the Tennessee 4th Infantry, which saw action at Shiloh, Perryville, and Chickamauga and suffering tremendous casualties. He made the trek out to the Utah Territory in 1866 to deliver a load of goods before settling in Ogden in 1867 to open a wholesale grocery business that would be very successful. Kiesel was a serial entrepreneur and would go on to start several other businesses, among them Rieger & Lindley, a liquor wholesaler, as well as a cigar shop and saloon in Salt Lake City. He also ranched horses and cattle, owned a vineyard, and invested in mining and real estate. He was an influential man in local politics as well, opposing the Mormon Church’s local control, and selling liquor in so-called “dry” locales. He would serve as the first non-Mormon mayor of Ogden from 1889 to 1890, representing the Liberal Party. He would rename Ogden’s main streets from Young (after Brigham Young), Smith (after Joseph Smith), and Franklin (after Franklin D. Richards) to Grant, Washington, and Lincoln in a campaign to “Americanize” the Mormon town. Even after the turn of the century, he was still opposing anti-alcohol laws and boasting his ability to get his product into “dry” regions.

This rifle is referred to as a carbine in today’s circles. It bears the hallmarks of having first been a military carbine before being rebuilt by the Sharps factory as this civilian gun. The frame tang has had a hole filled and the serial number stamped around it. The top of the barrel is marked “OLD RELIABLE” in the octagon and “SHARPS RIFLE CO. BRIDGEPORT. CONN.”

The overall condition is good. The iron parts are gray. The markings are legible. The rear sight is absent. The forearm has an old split underneath toward the left side. The bore looks good aside from a bit of debris that looks like it has been there since this rifle was retired. The action is excellent. This rifle looks the part and has definitely ridden the dusty trails of the West, even before Utah became a state!