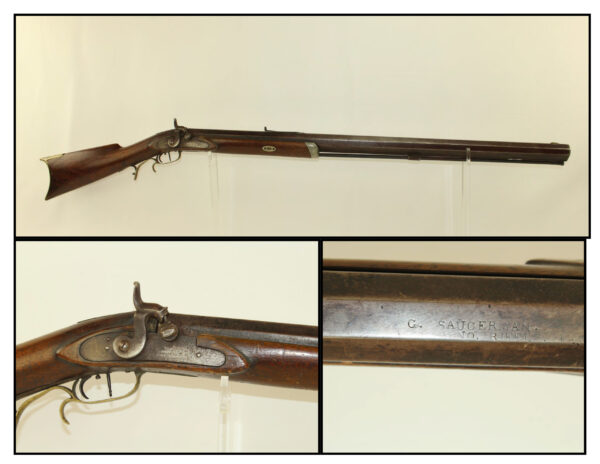 Here we present an antique Heavy Barreled Half-Stock Long Rifle by George Saucerman of Coshocton County, Ohio circa the 1840s. George was born on June 12, 1778 and died July 20, 1846 at the age of 68. He was succeeded in the gunmaking trade by his son, Barnet Saucerman (1821-1902), who spent much of his life in Sullivan, Indiana. Not much has been recorded of the senior Saucerman, but if Barnet’s obituary is any indication of the character of George, he was quite a man. Of Barnet was written: “He was a pioneer, worthy of the State in which he settled, a citizen of strict integrity, a soldier of chivalrous courage, a Christian of proud achievement.”

His Grand Army of the Republic Frank Neft Post had this to say upon his passing:

In 1846 he settled in this county; and, with a brave heart and a strong arm, commenced clearing away the dense forest, which at that time covered more than three-fourths of the land surface of the country, neighbors were few and far between and he depended largely as he has related to the writer of this sketch, on more than one occasion, on the game of the forest for his supply of meat. He took great pleasure in witnessing the settlement and improvement of the country and for over half a century that he was a prominent figure and co-worker in all undertakings having a tendency to benefit and elevate his fellowman He was tolerant of the opinions of others but his own actions were governed strictly upon the rights of principal and justice.

This principle was so thoroughly a part of his nature that his counsel and advice was frequently sought, and many times by his seniors in years. When the Union of States was threatened he provided for his family the best he could and on Aug. 15, 1862, enlisted as a member of Co. H. 85tb Reg. lnd. Vols., and served until June 12. 1865. His service was noted for his conscientious discharge of his duty as a solider and for his bravery and patriotism. No danger too great, no hardship too laborious for him when the flag of his country was assailed.

In the strife for the preservation of the union he knew no middle ground. So intense was his loyalty to his country and flag that even his enemies admired and respected his patriotism and courage. During an engagement at Thompson’s Station, Tenn., he was taken prisoner and confined in Libby prison for about one month. He was subsequently exchanged and participated in the Battles of Lalton, Resca, Dallas, the siege of Atlanta with many minor engagements and the marched with Sherman to the sea. In all these tests of courage he was never found wanting. He has been a consistent and ruling member of the Presbyterian church for many years. With this honorable record as pioneer, citizen, neighbor, soldier, patriot and christian gentleman be is worthy of the best tribute of men. He was a charter member of this Post, and highly esteemed by the entire membership. We can truly say from this the harvest is ripe and the fruits of labors do follow him.

The overall condition is good. The iron parts have a gray patina. The markings are clear. The stock shows much use and remains solid. The bore is dark with visible rifling. The action remains strong and crisp.