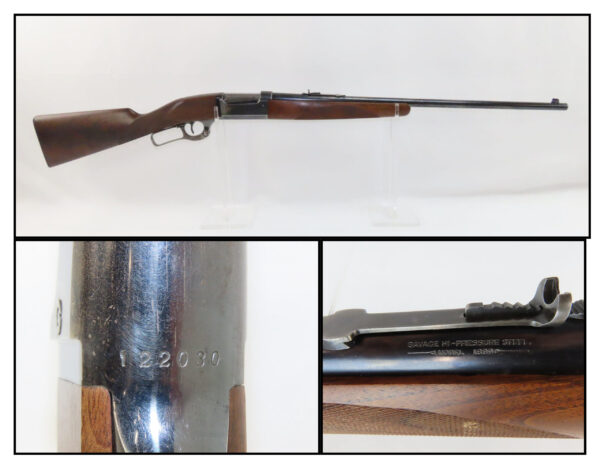 Here we present a Browning Brothers Co. Ogden, Utah Retailer Marked Savage Model 99A Lever Action Rifle with Scope, made in Utica, New York in 1912. The founder of Savage Arms, Arthur W. Savage was a restless and very productive sort who did a little bit of everything during his lifetime. He was born in Kingston, Jamaica to British parents in 1857. He went to school in Baltimore, Maryland in the United States and then in the UK. From there he moved about until he found himself in Australia looking for precious stones, exploring, homesteading and running cattle. He married and started his family (8 children) there before moving to Jamaica to try his hand at agriculture. Some sources say that he grew coffee and some bananas; likely, it was both. Moving on from there, he managed the Utica Belt Line Railroad in New York. In the meantime, he was tinkering with firearms design. By 1894, he seemed to have found his niche and founded his namesake company. Going up against the likes of Winchester, Savage began his firearms line with a lever action rifle, the Model 1895. His Model 1899 is perhaps his most endearing. The cartridges and detachable rotary magazine he developed are two of his most lasting impacts in the firearms industry today. True to character he sold out of the company in about 1905 and moved to California, where he founded the highly successful Savage Tire Company and continued to dabble in firearms.

This rifle is considered by some to be the pinnacle of lever action technology. Its unique magazine enabled the use of spire point ammunition in a lever action rifle since spire points in a tubular magazine like the Winchester or Marlin might set off a primer and cause a catastrophic event for the gun and the user. This one is chambered in Winchester’s 30-30 WCF rather than Savage’s .300 Savage cartridge, the latter still ubiquitous in deer rifles today!

The overall condition is Fine. The action is strong and crisp. The bore is bright and shiny. “BROWNING BROS CO. OGDEN U.” can be clearly read on the top of the barrel in front of “30-30”. This one comes with open sights but is also scope mount ready. The stock is in great shape with particularly attractive grain in the butt stock. “SAVAGE” is cast into the butt plate along with an image of a Native American Chief. A great rifle from Savage Arms with John Moses Browning provenance!