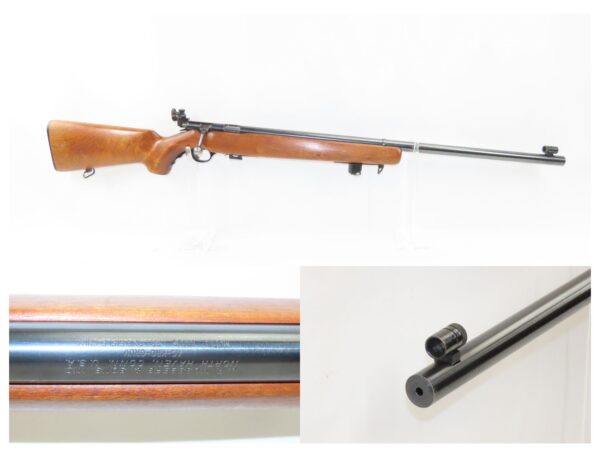 The Model 144US first appeared in O.F. Mossberg & Sons, Incorporated 1950 catalog. The Model 144 .22 rimfire target rifle was the offspring of its World War II veteran predecessor, the Model 44US used by American military recruits for marksmanship training. Mossberg designed the Model 44US for the War Department, which was in need of a dedicated training rifle for the 16 million Americans who ultimately served in WWII. Most who served learned to shoot, and many learned or demonstrated marksmanship in basic training with a Mossberg.

Mossberg’s surprisingly accurate Model 44US became a popular target rifle, and the company sold so many wars-end cancelled-contract rifles, designated Model 44US(a), that it went on to sell Model 44US(b), (c) and (d) versions, each with minor modifications. Part of the popularity was due to Mossberg offering its target rifles at prices below those of Winchester and Remington, when NRA Smallbore competitors in the 1950s probably well outnumbered other rifle disciplines. But the Model 44US was strictly a training rifle, not a Smallbore rifle, so it was a logical next step, then, for Mossberg to bring out what is essentially an improved Model 44US better suited and intended by design for competition, the Model 144.

This rifle’s predecessor, the 44US target trainer, was designed exclusively for the United States War Department and intended solely for the use of the U.S. Armed Forces. As it became clear to the Army that some cost cutting measures would be required, it was a clear choice when choosing a Rimfire .22 caliber training rifle. The Mossberg company already made and sold the Model 44B rifle, which fit the new US Army needs more closely. It was a simple bolt action rifle with a nice aperture sight but costing far less than the Model 1922. After discussion, Mossberg created a new model specifically for the military, which was the Model 44US.

Initially, the No. 4 receiver peep sight was rejected by the Ordnance Department and the first contract of 14,500 rifles were made in early 1943 with the Lyman 57MS (Mossberg/Stevens) receiver sight and the plain S-122 front sight with a globe. Harold Mossberg designed the new S-100 receiver sight which replaced the Lyman for the remainder of the production run (57,128 rifles) which continued until production ended in March of 1945. Rarely today will you see an example with the front sight cover as the locking tabs were prone to fail after repeated removal and installation.

The overall condition is very fine. Original finish preserved. Excellent action. bright, sharply rifled bore. The stock is in fine shape with minimal wear. “US0425” is stamped onto the left side of the barrel.