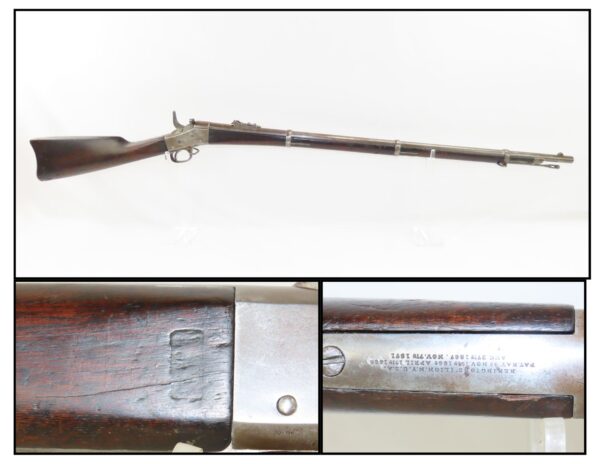 Here we present an antique U.S. Remington Rolling Block Army Rifle, made circa 1871-72 in Ilion, New York. The Remington Rolling Block rifle is a breech-loading rifle that was produced from the mid-1860s into the early 20th century by E. Remington and Sons (later Remington Arms Company). The action was extremely strong, and could easily withstand the increased pressure of the new smokeless powders coming into use by the late 1880s.

The Remington Rolling Block had a sturdy, simple action that was relatively inexpensive, just what many governments wanted in the latter half of the 19th Century. They were popular with civilians as well. Along with the Sharps rifle it was one of two rifles probably used more than any other by the buffalo hunters who hunted the American bison herds in the 1870s and 1880s. Civilian Remington rolling block rifles, and later surplus military rifles, became very popular among hunters in Scandinavia, particularly for moose hunting, with ammunition for the rifles being commonly available on the civilian market into the 1920s-1930s.

The overall condition is good+. The action is strong. The bore is bright! There are two cartouches on the left stock that are visible, and one cartouche on the right side. The right buttstock shows a crack that remains stable and solid. A neat contract piece from New York!